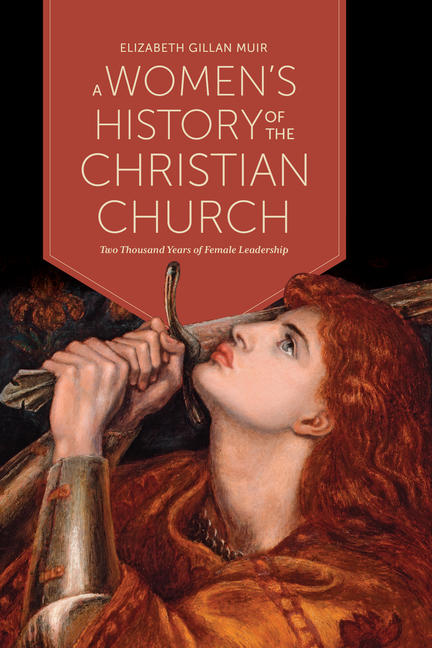 Tracing two thousand years of female leadership, influence, and participation, Elizabeth Gillan Muir examines the various positions women have filled in the church. From the earliest female apostle, and the little known stories of the two Marys – the Virgin Mary and Mary Magdalene – to the enlightened duties espoused by the nun, the abbess, and the anchorite, and the persecutions of female "witches," Muir uncovers the rich and often tumultuous relationship between women and Christianity.

Offering broad coverage of both the Catholic and Protestant traditions and extending geographically well beyond North America, A Women’s History of the Christian Church presents a chronological account of how women developed new sects and new churches, such as the Quakers and Christian Science. The book includes a timeline of women in Christian history, over 25 black-and-white illustrations, a glossary, and a list of primary and secondary sources to complement the content in each chapter.

Elizabeth Gillan Muir has taught Canadian history at the University of Waterloo and Emmanuel College at the University of Toronto. She has written extensively about women in Upper Canada and the role of women in the Christian Church. Elizabeth holds degrees from Queen’s University, the Harvard Business School, and a Ph.D. from McGill University. She lives in Toronto.

"Those who cannot remember the past are condemned to repeat it." George Santayana (1863–1952)

This book grew out of an International Women’s Day event created and organized by female theological students in Toronto, Canada. Those of us invited to be panelists were asked to talk about a woman we admired in the history of the Christian Church. During our discussions, it became all too readily apparent that theological students were quite unaware of the rich history and extensive contributions of female leadership in the church over the centuries. Even church history specialists had little or no knowledge of female leaders apart from a few early martyrs.

The general public is of course even less aware. When I mentioned this project to one friend, she said, “Well, that will be a thin book.” Another woman told me that she had heard of a monastic community in the middle ages that was supervised by women, but likely I would find it because it was unique.

This, then, is an attempt to make the thousands or millions of women leaders in the Christian Church over the centuries better known.

I have to confess, though, that even I was not fully aware of all the remarkable research that has been accomplished recently in this area and the many women who have been uncovered and brought back from obscurity. I was reminded of one of my New Testament professors when I was at graduate school, who wrote his dissertation on one aspect of the life and work of Saint Paul. Wanting to be thorough, he said that he had decided to read everything that had been written about Paul. He began on one end of the relevant shelf in the library stacks, only to realize very soon that new books were being added on the other end faster than he could read through the works already written.

This was almost the case with the history of women in the church. My intention has been to distill and meld my own research with the results of other historians’ research and produce women’s 2,000-year story. Most of the research already completed has been necessarily restricted to one woman, or one community or denomination, or one time period or geographical location, and I believe that the whole story needs to be told to present a picture of all the women’s work that has been undertaken. But I must apologize where I have had to omit some findings. There are so many studies. Dozens of female and male theologians and historians have produced innumerable works, most of it excellent, but it has not been possible to include everything that has been written in the number of pages allotted to this book. There is also the problem of hagiographical studies; much of that information is unfortunately suspect or at least lacking in human detail.

Since histories in the past have almost totally excluded women—half the adult population—it may seem fair and timely today to write a history of only women. But there are some dangers with this approach. First, it may give the impression that women have achieved more than they actually have, and that they were not as restricted as they often were. And second, there is the problem of bias and lack of objectivity. When I taught courses on women’s history, I always began by stating that the course was totally objective. Never having been challenged on this point, I then had to confess that I believe there is no such thing as total objectivity. We are all biased to a degree, depending on our upbringing, where we’ve gone to school, what we’ve read, where we’ve lived, what churches we’ve attended, what our parents have taught us, and so on. But the important point is to know and acknowledge one’s bias. My bias will probably become apparent as you read this story, although I have attempted to present different sides of various issues. I hope that you as a reader will understand and acknowledge your own bias. As my koiné or biblical Greek professor said to us once, “There are three Truths. My Truth, Your Truth, and The Truth.” Simple perhaps, yet very profound, a dictum that could have avoided much of the violence, sexism, and discrimination that you will read about on the following pages if ecclesiastics and politicians had accepted this reality.

The next step, of course, is for a future historian to integrate all the following chapters into a complete history with equal attention paid to both men and women. There is also a need for an up-to-date history of feminist theology; and perhaps another historian could research LGBTQ members throughout the history of the Christian Church. This particular study, however, remains a history of female leadership, as much as can be recorded in the assigned number of pages.

One further note: As historians are aware, the way names are spelled and dates recorded varies tremendously over the centuries and even during a person’s lifetime, sometimes even in the same document. Thus you may find discrepancies in spelling and dates on the following pages compared with what you may have read elsewhere.

May you applaud the many strong, determined, and extraordinary religiously affiliated women described in the ensuing chapters, whatever your bias or your belief.

Other titles by Elizabeth Gillan Muir

Women and Their Work in 19th-Century Toronto

A Women's History of the Christian Church

Canadian Women in the Sky

East of the Don