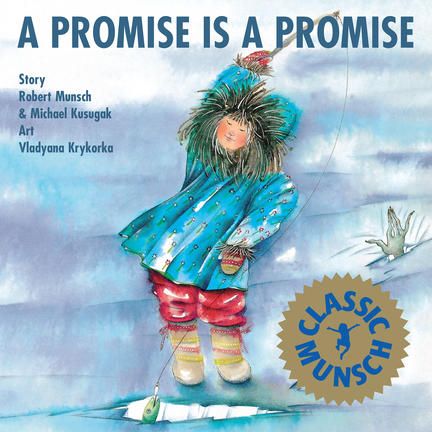 When Allashua disobeys her parents and goes fishing on the sea ice, she has to use her wits to escape the Qallupilluit--the troll-like creatures her parents have always warned her about that live beneath the frozen surface of the sea. But the only way to break out of their grasp is through an exchange: Allashua can go free if she brings her brothers and sisters back to the sea ice instead. Allashua doesn't want to give them up, but what can she do? After all, a promise is a promise.

A Promise Is a Promise is a collaboration between award-winning storyteller Michael Kusugak and celebrated children's author Robert Munsch. This 30th anniversary edition brings all of the tension of the traditional Inuit story to a new generation of readers. Added features include a new foreword by Michael Kusugak on his role as a storyteller and the importance of storytelling in Inuit culture.

Vladyana Krykorka has illustrated and designed over 30 books for children. Her work has received numerous awards, including the Toronto Public Library’s recognition of Baseball Bats for Christmas as one of the 100 best children’s books of all time. In the last two years she has conducted art workshops in several Quebec Arctic communities, working with Inuit teachers in the creation of their own books and class materials, as well as textile printmaking techniques.

“A strong picture-book offering from Robert Munsch, even if it’s not quite what one would expect from this author. I definitely recommend giving it a try.”

A Promise is a Promise

Munsch is the bestselling author of The Paper Bag Princess. Kusugak is the author of My Arctic 1, 2, 3. Krykorka has illustrated all of Kusugak’s books.

I Can Fix It