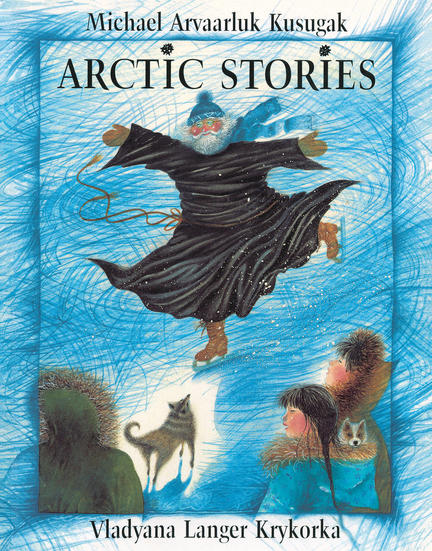 Acclaimed Inuit storyteller Michael Kusugak weaves a tapestry of tales about ten-year-old Agatha and her accidental heroism in the high Arctic of 1958. The first of Agatha's stories is based on one of Kusugak's real life experiences, when an eerie, black airship flew over Chesterfield Inlet in 1958. A sleepy Agatha "saves" the community from the monstrous flying object.

In the second story, Agatha notices the playful antics of the winter ravens and takes an interest in the many migrating birds. As the seasons change, she begins to favor more beautiful and peaceful birds of spring, until the ravens return.

The third of Agatha's stories takes place in the fall when Agatha is sent to school in Chesterfield Inlet, an English-speaking community south of her home. During an afternoon of skating, Agatha rescues a show-off priest, who has inadvertently demonstrated the danger of thin ice.

The three Agatha stories resonate with the nostalgia and affection of Kusugak's childhood memories.

Vladyana Krykorka has illustrated and designed over 30 books for children. Her work has received numerous awards, including the Toronto Public Library’s recognition of Baseball Bats for Christmas as one of the 100 best children’s books of all time. In the last two years she has conducted art workshops in several Quebec Arctic communities, working with Inuit teachers in the creation of their own books and class materials, as well as textile printmaking techniques.

A Promise is a Promise

Notes from a Children's Librarian: Books from the North

Our children's librarian columnist, Julie Booker, brings us a new view from the stacks every month.