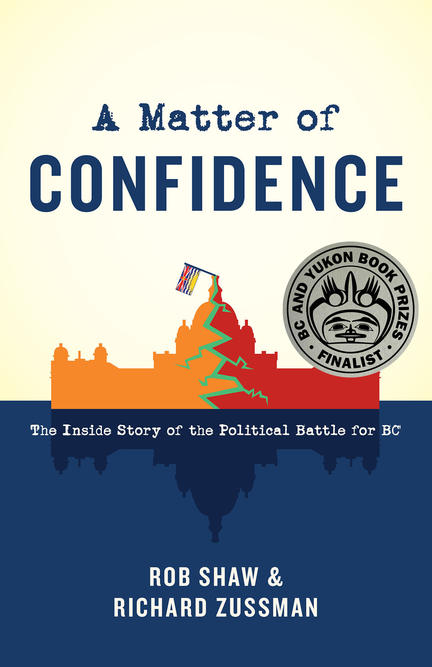 A breathtaking behind-the-scenes look at the dramatic rise and fall of Christy Clark’s BC Liberals, the return to power of the NDP, and what it means for British Columbia’s volatile political climate going forward.

British Columbia’s political arena has always been the site of dramatic rises and falls, infighting, scandal, and come-from-behind victories. However, no one was prepared for the historic events of spring 2017, when the Liberal government of Christy Clark, one of the most polarizing premiers in recent history, was toppled.

A Matter of Confidence gives readers an insider’s look at the overconfidence that fuelled the rise and fall of Clark’s premiership and the historic non-confidence vote that defeated her government and ended her political career. Beginning with this pivotal moment, the book goes back and chronicles the downfall of Clark’s predecessor, Gordon Campbell, which led to her unlikely victory in 2013, and traces the events leading up to her defeat at the hands of her NDP and Green opponents. Told by reporters Richard Zussman and Rob Shaw, who covered every moment of the election cycle, and illustrated by candid and extensive interviews with political insiders from both sides of the aisle—including Christy Clark and John Horgan—this book is a must read for anyone who cares about BC politics and the future of the province.

Rob Shaw has covered the BC legislature since 2009, first as the legislative reporter for the Victoria Times Colonist and currently as the legislative columnist for the Vancouver Sun. His stories have appeared in local and national newspapers through the Postmedia News chain.

Richard Zussman is a legislative reporter with Global BC. Born and raised in Ottawa, he studied political science at Queen’s University and earned a master’s in broadcast journalism from Syracuse University. Before joining Global he held positions with City TV in Edmonton and the Sun News Network and was a provincial affairs reporter for CBC British Columbia. He lives in Victoria, BC.

". . .a well-written, compelling and fast-paced narrative that does ample justice to the unprecedented circumstances that yielded such a seismic shift in B.C.’s political landscape . . . A Matter of Confidence is a must-read for anyone with an interest in politics, not just those in B.C."

"In these pages are offered the best depiction of what actually happened in this province over 8 years that we’ll ever read. Much like Michael Wolff’s Fire and Fury, about the first days of the Trump administration, you’re a fly on the wall in many conversations and decisions you may have wondered about, and ones you didn’t even know happened, leading up to the GreeNDP’s first day in office."

"An engaging and lively account of arguably the most exciting chapter in BC political history, A Matter of Confidence takes the reader behind the scenes for a fascinating look at how an uncertain election result turned into a change of government. One of the best books ever on British Columbia politics."

"Shaw and Zussman are good guides to take you through the eventful years of BC politics."

Shaw and Zussman have provided a comprehensive and highly readable account not just of the B.C. election of 2017 and the first minority government in the province in sixty-five years, but the entire decade of politics in the province that preceded these historic events. A Matter of Confidence is a great summer read for any political junkie.

". . . addictive reading for political junkies and useful for anyone interested in what goes on behind the scenes in government

"From the man who did not want the job, to the woman who campaigned like she could not lose, to the fledgling party leader who picked the winner after the closest election in provincial history—this is the vivid, definitive account of an unprecedented year in BC politics, written by two of the best reporters on the beat."

Shaw and Zussman do a very good job of showing how different types of 'confidence' can lead to both success and failure in the tumultuous world of BC’s polarized politics.

"Political junkies will enjoy this insider’s look at what goes on out of the public eye, while others will surely learn a thing or two about the crazy roller coaster ride otherwise known as B.C. politics."

". . . organizes all the political chaos of the last year into one coherent narrative."

"The pages pulse with emotion. There is devotion and betrayal and everything in between. It truly is a page-turner."