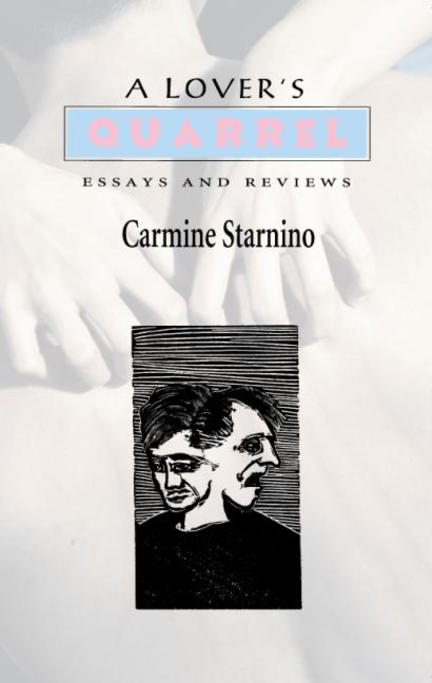 More outspoken criticism from one of the 'attack dogs of Canadian Literature'.

Carmine Starnino is the author of three collections of poems: The New World (which was nominated for the A. M. Klein Prize for Poetry and the Gerald Lampert Memorial Award), Credo (winner of the C A A Jack Chalmers Poetry Award), and With English Subtitles. His reviews and essays have appeared in a wide range of newspapers, magazines and literary journals, including the Globe and Mail, the Montreal Gazette, Matrix, Arc and The Montreal Review of Books. Starnino is the editor of Vehicule Press` Signal imprint, poetry editor at Canadian Notes and Queries, and editor-in-chief of Maisonneuve. Starnino lives in Montreal.

'A Lover's Quarrel is not only a good book -- thoughtful, stylish and consistently engaging -- it is also an important book because it begins to correct a reductive and largely unexamined consensus about what constitutes ''Canadian Poetry'' that has resulted from the well-intended but misguided literary nation-building carried out by such critics as Margaret Atwood, Dennis Lee and George Woodcock. Readers who pretend to love and believe in Canadian poetry and who ignore or dismiss this book will be impoverished as a result. As Starnino says, ''dissent is essential for its own sake'' (italics in original).'

'Might as well get this out of the way: Carmine Starnino is the most hated man in Canadian poetry, and he works hard at it. One can't circulate in Canpo circles these days without hearing rabid denunciations, apoplectic attacks, and fulminant castigation as mindless as it is vehement. Yet for the purposes of a review, not a cross-burning, it is better not to dwell on this status too much other than to acknowledge that Starnino has, through the sheer force of his rhetoric, forced the poetry-loving public in this country to reevaluate its idols. As despised as his message sometimes is, it is finding an audience.'

'A Lover's Quarrel is a big collection of essays and reviews in which the author struggles heroically to think and speak intelligently about what is wrong with most Canadian poetry, and by implication most Canadian ''creative''' writing. His subjects are addressed nowhere else in the so-called critical literature of the nation, which consists almost entirely of thematic commentary. The result is that our good writing (and there is some very good writing here, but no tradition of good writing) is submerged in the conspiracy of mediocrity that hovers over our literature and renders it homogeneous and boring.'

'Starnino's high-contrast style almost begs reviewers to either blast or bless this book. Anything less means joining the wimpy ranks of the cautiously nice. Well, sorry folks: Starnino is not the moustache-twirling villain who ties bad poets to the rails, though he playfully (or anxiously?) supplies this very image in his epigraph. Nor is he simply the brave lad who dares proclaim the nakedness of Canada's poetic emperors. In the mould of John Metcalf, he's a kicker against the pricks, upholder of a narrow range of poetic values that is, to his credit, always explicit.'

'Starnino, from his desk in Montreal, has already established a reputation as one of the most forthright and incisive poetry critics working in Canada's literary press. Whatever one thinks of his judgements, there can be little doubt that he judges the work in front of him and not the reputation of the poet or the debased laurels wreathing the book's uncracked spine. Starnino is widely read, and serious about craft, and his reviews exhibit a sharp understanding of what constitutes a good poem.'

'A Lover's Quarrel is an interesting, quirky, look at recent Canadian poetry, and it will incite the further quarrels it obviously seeks.'

'In concluding, I'll risk the kind of statement that would have seemed foolhardy at the outset: Carmine Starnino is one of the most important writers and readers of poetry in the contemporary English-speaking world. America has no one like him. It may be, for reasons of culture, history, and perhaps even geography, that only Canada could have produced him at this juncture. In any case, his talent, idealism, and ambition make his work exciting, and I would say necessary, reading. Unless, that is, we want to be hopelessly provincial.'

'Halfway though the title essay of A Lover's Quarrel, his collection of reviews and essays on Canadian poetry, Carmine Starnino writes, ''If Joseph Brodsky can declare poetry to be humanity's anthropological destiny, then Canadian poetry is possibly its evolutionary dead-end.'' Readers in Canada may be either delighted or outraged by that statement, but chances are few Americans will have the requisite background to judge its truth or falsity. In part, this is due to American ignorance of poetry being written in the rest of the English speaking world -- the British Isles included. In part it's because Canadian literature, like Canada itself, is a relatively young phenomenon, and there is correspondingly less of it. And in part, Starnino says, it's because of critical and poetic factors that have made the emergence of world-class poetry in Canada both more difficult both to create and to identify.'

'Carmine Starnino is a poet and editor whose lively and engaging critical voice has joined the small but growing chorus of anti-establishment writers dissatisfied with the state of Canadian literary criticism and challenging the accepted canon on a number of grounds.'

Other titles by Carmine Starnino

The Book of Malcolm

My Son's Life with Schizophrenia

An Anthology of Canadian Poetry