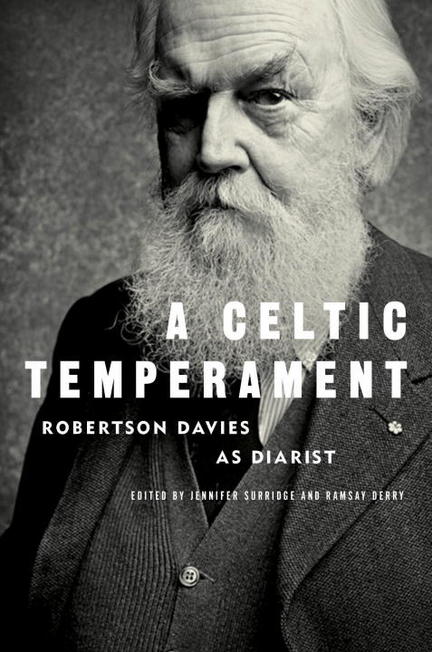 Versatile and prolific, Robertson Davies was an actor, journalist and newspaper publisher, playwright, essayist, founding master of Massey College at the University of Toronto, and one of Canada’s greatest novelists. He was also an obsessive, complex, and self-revealing diarist. His diaries, which he began as a teenager, grew to over 3 million words and are an astonishing literary legacy. This first published selection of his diaries spans 1959 to 1963, years in which Davies, in mid-life, experienced both daunting failure and unexpected success.

Born in Thamesville, Ontario, in 1913, he was educated at local schools, then Upper Canada College, Queen’s University and Oxford University. He worked in England at the famous Old Vic theatre as an actor and literary advisor before returning to Canada where he became the editor and publisher of the Peterborough Examiner, established himself as a prominent Canadian playwright, and published his first three novels now known as the Salterton Trilogy. By 1959, at the age of forty-five, Robertson Davies was already one of Canada’s leading literary figures. Even so the diaries show that he was frustrated by the limitations of his literary success, often exasperated with the distractions of his daily life and buffeted by his mental and emotional state. They also show that he enjoyed life, was deeply interested in the society he lived in, and in the people he encountered. More often than not he found comedy in the world around him and delighted in recording it. He kept not only a daily journal, but also more focused diaries such as his accounts of the Toronto and New York production of his play Love and Libel, when he worked closely with the great British director Tyrone Guthrie, and of the founding of Massey College, the brainchild of Vincent Massey. The descriptions of backstage and academic politics are invariably entertaining, but in his diaries Davies also reveals himself as intensely self-critical, frequently insecure, and with a highly changeable nature that he described as his “celtic temperament.” We also see him as a partner in an intensely happy and creative marriage, and as a man with an astonishing capacity for hard work. By the end of 1963 his life had taken a new direction. As master of Massey College, he finds himself a public figure, but he is increasingly preoccupied with a new novel he wants to write which he is calling Fifth Business.

The publication of A Celtic Temperament establishes Robertson Davies as one of the great diarists. In their range, variety, intimacy, and honesty his diaries present an extraordinarily rich portrait of the man and his times.

“Robertson Davies was an original and his diary may well prove to be the best and most riveting ever produced by a Canadian. It bears a welcome affinity to the diaries of Samuel Pepys and Sir Henry ‘Chips’ Channon, but because of Davies’ broad, complicated humanity, it also stands alone in its celebration of a life lived to the full in this remarkable man’s very own world of wonders.” —John Fraser, master emeritus, Massey College

“With frankness and humanity, A Celtic Temperament tracks the emerging Canadian literary soul, circa mid-20th century. Even better, these lovingly curated diaries summon the spirit of one great literary soul at a key juncture. Here is the Robertson Davies some may have forgotten – talented, ambitious, loving, stern, frail and very funny. Surely he is back among us for good.” —Charles Foran, author of Mordecai: The Life & Times

“Davies himself called his diary-keeping ‘thoroughly selective and dishonest,’ but in fact this installment is thoroughly disarming and engaging. Dinners, gossip, tantrums, deep thought—it’s like your own diary, but much more fun to read. His advice to self, his writing woes and resolutions, his New Year’s visit to an astrologer (‘I am on an upward pathway… Will in later life be very much a sage and teacher’). All the ephemera and permanence of life combine to give us a vivid and entertaining portrait of the man and the times.” —Marina Endicott, author of Close to Hugh

“This book sheds fascinating new light on Canada’s most famous man of letters. Davies’ witty observations about Canada in the 1960s contrast sharply  with his own sense of failure and despair. He is funny, frank and unexpectedly fragile.” —Ann MacMillan, former CBC London Bureau Chief

"The diaries are irrepressible, erudite, gossipy, and extremely naughty. I literally could not put them down. Anyone interested in Davies’ thoughts on the theatre of Stratford and Toronto in the early 60s—and more importantly, in his description of the creation of Massey College —will find these diaries irresistible." —Martha Henry, actor and director