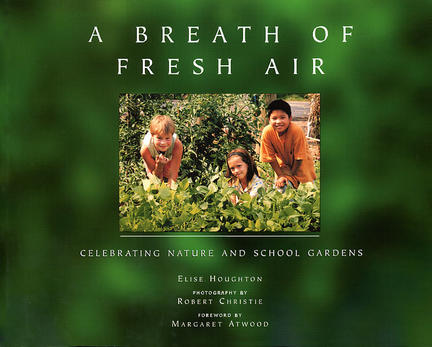 A documentation of the exciting intitiatives that have been happening in the movement to green schoolyards, A Breath of Fresh Air is filled with luminous photographs of children and gardens, as well as the schools, communities, and teachers that nurture them.

Exploring the myriad benefits of school gardening, A Breath of Fresh Air details school garden projects across Toronto. In the course of acknowledging the effort and dedication that it takes for a community to transform a schoolyard from packed earth or asphalt to a living landscape, A Breath of Fresh Air discusses topics such as habitat rehabilitation, play gardens, and the need to reconnect children with nature. This beautifully designed book with stunning full-colour photography will inspire teachers and parents to look at and celebrate their schoolyards in a new light.

Elise Houghton has worked with parents and educators to support the inclusion of ecological literacy as part of public education. She now works as an environmental education consultant and writer in Toronto.

Other titles by Robert Christie

The Optimism of Colour