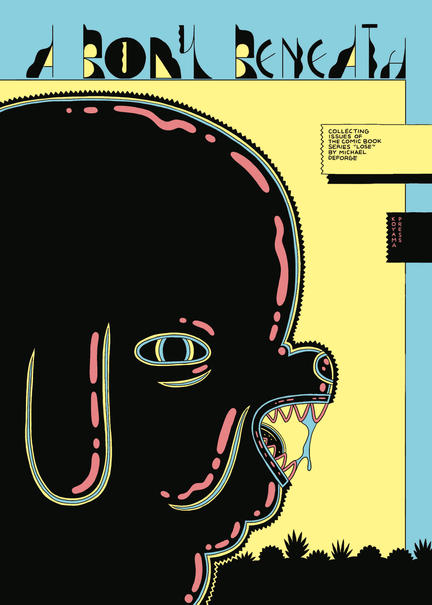 A Body Beneath collects issues two through five of Michael DeForge's multi-award winning anthologyLose. DeForge's singular vision reveals the menace in the mundane, the humor in the horrific. He has crafted a phantasmagoria of stories that feature a spider-infested pet horse head, post-apocalyptic dogs dealing with existential angst, the romantic undertones of a hired hit, and more.

Michael DeForge was born in Ottawa, Ontario. He currently lives and works in Toronto as a cartoonist, commercial illustrator, and as an effects, props, and character designer for the hit Cartoon Network programAdventure Time.

Michael DeForge was born in 1987 in Ottawa, Ontario. He currently lives and works in Toronto as a cartoonist, commercial illustrator, and as a designer for the hit Cartoon Network programAdventure Time. Past illustration clients includeThe Believer,Vice,New York Times Magazine, andThe Walrus. His one-person anthology seriesLose has received great critical and commercial success and is published by Koyama Press.Lose #1 won in the Best Emerging Talent category at the 2010 Doug Wright Awards, andLose #3 won the 2011 Ignatz Award for Outstanding Comic.Lose #4 was released in Spring 2012, and was nominated for the Eisner Award for Best Single Issue (or One-Shot). The fifth installment was released in Spring 2013. His web comic stripAnt Comic was serialized weekly and will be collected into a graphic novel by Drawn and Quarterly upon its completion. DeForge's work blends an encyclopedic knowledge of cartooning with a range of influences that include Jack Kirby, Eduardo Munoz Bachs, Mark Newgarden, and Hideshi Hino.

Winner of the 2013 Ignatz Award for Outstanding Series

Winner of the 2013 Ignatz Award for Outstanding Artist

"Stories about body horror, S&M, Canada; it's easy to call Michael DeForge the David Cronenberg of comics. But more specifically, I'd call him the 'noise rock' of the industry, and it helps that he's in a noise rock band." —GeekRex

"DeForge's comic universe reflects the dark corners of our real one, but — sensitive and hopeful storyteller that he is — he hasn't forgotten about the exuberance, wonder and happiness there either." — Chris Hampton,The Toronto Star

"Like folk tales, they [the stories inA Body Beneath] fill us with dread and take terrible but expected turns. This sort of viscera-level reaction is precisely DeForge's greatest strength, and it has clearly been present from the beginning of his career." — Hillary Brown,Paste

"One of the most exciting and unpredictable cartoonists working in comics, Michael DeForge has a unique perspective that juggles humor, tragedy, whimsy and horror to create unforgettable stories." — Oliver Sava,Los Angeles Times

"Like folk tales, they [DeForge's stories] fill us with dread and take terrible but expected turns. This sort of viscera-level reaction is precisely DeForge's greatest strength, and it has clearly been present from the beginning of his career." — Hillary Brown,Paste

"Drawn over four years, the comics show the young artist growing more assured and the artwork becoming more confident without losing its bizarre simplicity. Fans who discovered DeForge withAnt Colony will not be disappointed by what preceded it." — Gordon Flagg,Booklist

"Truly, if anything can be said about DeForge's work, it is that it's better when experienced than it is to hear about it, so for god's sake, go and pick up this book right now." — Greg Mannix,End of the Universe

"DeForge is the next-generation Ware. InLose, he explores artistic experimentations that remain readable because of his sharp sense of humor and surprising storytelling. As a result, he has become an influential nexus in an array of talented young comic creators who are pushing beyond the observational sensibilities of '90s and early '00s era indie comics while moving into a fusion of fantasy, horror, auto-bio, surrealism, and pornography." — Rich Barrett,mental_floss magazine

"Though no cartoonist is without recognizable precursors, he [DeForge] is one the most original creators of this new century, with an instantly identifiable approach to cartooning. I don't think I could name another 'young cartoonist' whose work is always so visually forceful and emotionally engaged. And I meanalways." — Ken Parille,The Comics Journal

"Collected between these covers are some of the best avant-garde comics drawn in the last ...well, ever. Top-of-the-heap great cartoonists emerge once in a generation. DeForge is today's one. Striking, funny, disturbing, beautiful, original." Seth, Author ofPalookaville

"If you aren't reading Michael DeForge, I don't know what you're doing with your life." — Timothy Callahan,Comic Book Resources

"DeForge's world is not for the squeamish. But it is one whose grotesqueries increasingly mirror, rather than distort, the mundane world with which we think we are familiar." — Sean Rogers,The Globe and Mail

"Prolific young Canadian-born avant-garde artist DeForge has become one of his generation's most admired cartoonists, and this is his first sizable collection. While often willfully unsettling, DeForge's work resonates on many levels." —Publishers Weekly (starred review)

"Everything and everyone in his [DeForge's] drawings is dripping, bubbling and developing unsightly growths. He warps and dents the assured, geometrical forms of vintage newspaper strips and new wave-era graphics into oddly adorable horrors; his stories are prone to whiplash formal shifts."— Douglas Wolk,The New York Times

"I just picked up Michael DeForge'sLose #4 and it rules, like all of his comics. I say it all the time, DeForge is one of the best out there these days. Pick up any issue ofLose, pick them all up." — Kate Beaton author ofHark! A Vagrant (Drawn & Quarterly, 2011)