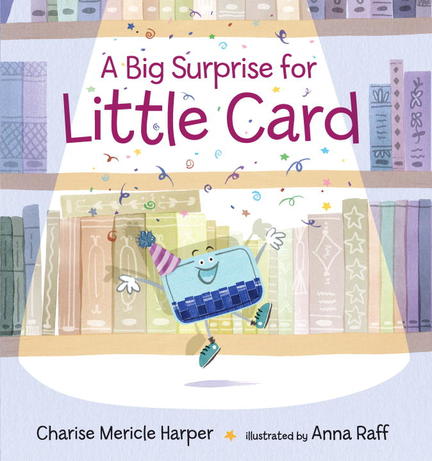 Fall in love with a disarming picture-book hero in this quirky ode to spirit, identity, and the joy of having (or being) a library card.

In the world of cards, each one has a special job to do. Big Card keeps important papers in order. Tiny Card can be exchanged for a prize in an arcade. Round Card hangs out in a glamorous boutique. But is any card as lucky as Little Card? He’s going to school to become a birthday card — in other words, to sing, play games, eat cake, and be happy all day long. But wait! On the day he’s supposed to take his talents into the world, Long Card tells him there’s been a mix-up and they need to trade jobs. How can Little Card bring his exuberance into a library, a quiet place of books and rules and hushing? Offbeat and utterly endearing, this tale of a little guy who gives it all he’s got is complete with a sweet twist and a surprise ending.

Charise Mericle Harper has written and/or illustrated more than twenty books for children, including the Just Grace series. Born in Vancouver, Canada, she now lives in New York State.

Anna Raff has illustrated several books for children, including World Rat Day by J. Patrick Lewis. Her illustrations have appeared in the New York Times, the Washington Post, and Kiwi magazine, among other publications, and she is the creator of Ornithoblogical, a blog of bird-related imagery. She is on the faculty of the School of Visual Arts Illustration Summer Residency Program in New York City, where she lives.

Not much in life holds the mystique of a child’s first library card, and this book celebrates that lovely milestone. In Harper’s clever story, Little Card, a cute sneaker-clad fellow with ­expressive eyebrows, is all set to be a birthday greeting, until he’s sent instead to become the library card of a girl named Alex...as the library’s wonders are revealed, it becomes clear that even if it’s not a birthday party, the place has something to offer every day.
—The New York Times

Harper's addition to the intro-to-library canon, with its anthropomorphic card cast, is a goofy winner. Raff's mixed-media collages, digitally colored, are a bright, perfect match for Little Card's excitement about all things library...Check it out!
—Kirkus Reviews

Raff’s minimalist illustrations, splashed in delicate pastels, and Harper’s playful text conjure up a world as buoyant as it is endearing.
—Booklist

Little Card is expressive and endearing, and in some instances, his exuberance can barely be contained...A good addition to library-themed storytimes.
—School Library Journal

Other titles by Charise Mericle Harper

The Heat Is On

Mae and June and the Wonder Wheel

The Doodle Book of Feel Good

A Doodle/Coloring Book for All Ages