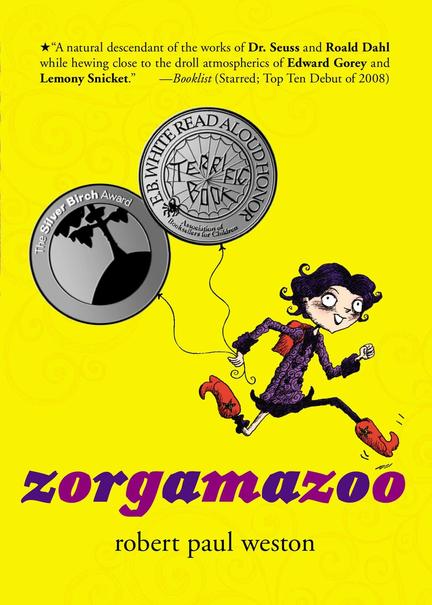 Are You a Believer in Fanciful Things? In Pirates and Dragons and Creatures and Kings?

Then sit yourself down in a comfortable seat, with maybe some cocoa and something to eat, and I'll spin you the tale of Katrina Katrell, a girl full of courage (and daring, as well!), who down in the subway, under the ground, saw something fantastical roaming around . . .

What was it she saw? I'd rather not say. (Who's ever heard of a Zorgle, anyway?)

But if you are curious, clever and brave, if intrepid adventure is something you crave, then open this book and I'll leave it to you to uncover the secret of ZORGAMAZOO!

Join Morty the Zorgle and Katrina on a fantastically illustrated, you'll-wanna-read-every-word-aloud, sophisticated rhyming adventure for kids of all ages!

Robert Paul Weston is the author of several internationally award-winning books for children and young adults. His first novel, Zorgamazoo, won the Silver Birch Award, the Audie Award, the California Young Reader Medal, and an E.B. White Read Aloud Honor. His second novel was the hard-boiled fairy tale Dust City, which was a Canadian Library Association Young Adult Honour Book and was shortlisted for both the Red Maple Award and the Edgar Allan Poe Award for Best Young Adult Mystery. His recent novel, The Creature Department, is shortlisted for the Silver Birch Award.

Other titles by Robert Paul Weston

Prince Puggly of Spud and the Kingdom of Spiff