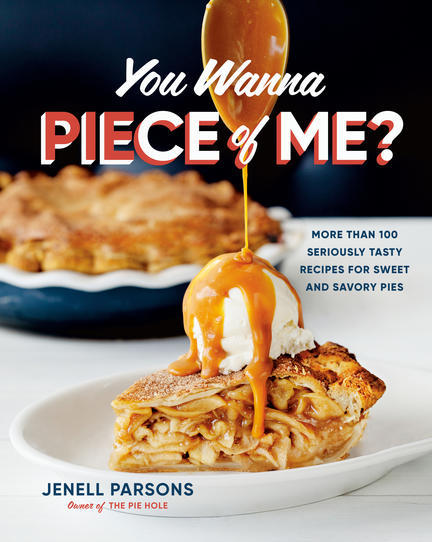 Is there anything better than a tender, flaky pie still warm from the oven? This Pi Day, bake the best pie of your life with the incredible recipes in You Wanna Piece of Me?

With more than 100 recipes for savory and sweet pies, there is a pie here for absolutely everyone. Start with a pie dough like no other--the Double Butter Crust--then riff on classic pies, like Apple Brown Butter or Lemon Meringue Pie; or try a crazy-delicious new creation like Bacon Cheeseburger Pie, Raspberry Custard Crumble, or the Fat Elvis (a mind-blowing chocolate banana caramel pie smothered in peanut butter whipped cream). Included inside are endless options for vegetable, fish, chicken, beef and lamb pies, as well as fruit, cream, nut, chocolate and more! Gluten free options? Absolutely. Vegan recipes? So many. You'll be having pie for breakfast, lunch, dinner and, obviously, dessert! Not to mention creative recipes you won't find anywhere else, for things like Handpies, Pie Pop Tarts or Pie Poutine--perfect for using up the dough scraps you'll have lying around after you've made the most AMAZING pie.

You Wanna Piece of Me? gives you everything you need to make jaw-dropping pies like a pro: a comprehensive guide to tools and ingredients, step-by-step recipes and photos for flawless crusts every time), tips and tricks for edges and tops (braids! lattices! roses!), crumbles, sauces, and sugars, and so much more!

Fire up your oven and hand out the forks--it's time to stuff your pie hole!

JENELL PARSONS was over her day job and ready for the next adventure when she decided to turn her hobby of making pie into a business: the now multi-award-winning Pie Hole. Now with three locations, and an online store, there's no stopping what Guy Fieri calls Jenell's "whole different level of pie." Jenell lives in Vancouver with her husband, daughter, and dogs.

Excerpt: You Wanna Piece of Me?: More than 100 Seriously Tasty Recipes for Sweet and Savory Pies (by (author) Jenell Parsons)

From the Introduction:
Any Way You Slice It!
The day we opened we had “oven issues” (or that’s what I decided to call it). Instead of flipping the “closed” sign on the door around to “open,” I panicked and sent one of my new staff outside to explain that we would not be opening as planned, blaming those oven issues. A wave of disappointment swept down the lineup of people eagerly waiting outside. In reality, of course, the oven was fine; it was me who wasn’t. I was terrified all over again that I wasn’t ready, that for some reason the pies I’d been making for the past six years weren’t good enough. But then the first person in line spotted the display case inside, full of pies. They insisted on buying a pie from it—it didn’t matter if the oven was “broken”; these pies were ready to be eaten! Well, once the door opened, they all came flooding in. Despite my best efforts to remain closed that first day, we sold out of pie. It was a sellout opening day, and I never even flipped the sign on the door!

A short, crazy six months later, we outgrew our space. We were making pies as fast as we could but still turning customers away. Not only were we a regular spot for the locals, we had become a destination for people visiting Vancouver. Over the years, we’ve had customers from all over Canada, the US, New Zealand, and Germany (to name just a few), who all make a stop at The Pie Hole part of their Vancouver itinerary. If word was going to keep spreading, I had to be strategic about my second location and make sure it was big enough to be used as a central bakery from where we could distribute to our wholesale partners, and of course our current shop, and future shops to come.

When I sat down to write this cookbook, I got a bit stuck. I packed up my laptop and went to a café to write. But it wasn’t just any café; it was mine (goosebumps). Sitting there with a cup of tea, I interacted with all my fellow pie lovers—from our daily regulars to those visiting for the first time. When I said I needed inspiration—well, there was certainly no shortage of it there. Our customers are not shy (which I love!); they often approach me and share their stories every day. Stories about baking pies with their moms; about their grandmothers who carefully planned family dinners to include everyone’s favorite pie; tales about the time they attempted and failed to make a pie, usually muttering about how difficult pie crust is to make. Many of their stories make me smile; some make me tear up and hug them in a warm embrace.

Recently an older woman told me that she used to come every week to The Pie Hole for apple pie with her husband. Apple pie was his favorite, and after more than 50 years of marriage, she was so happy to have found a place where he loved the pie so much that she didn’t have to make it anymore! She told me that he recently passed away, but that when she’s really missing him, she comes to the shop and orders a slice of apple pie, just as they did on their weekly dates.

People often open their hearts to me, sharing some of their fondest memories and real vulnerabilities with me. They walk away not knowing how their stories affect me— and they do, deeply. As I am writing this book, I keep changing the words on the page in a direct reflection of these inter- actions. Day after day, as I watch customers come through the doors, I am constantly reminded how special this thing I have created is. Over the years, countless customers have brought Pie Hole pies to their family dinners and special occasions. It’s amazing and it’s humbling. We have become a part of their traditions and helped contribute to their lasting memories. For me, there is nothing more special than that.

I am delighted to write this book, and to share my recipes with all of you. My hope is that you will create a little of the same magic we have at The Pie Hole in your own home.

Praise for The Pie Hole:
“The Pie Hole has some killer pies you don’t want to miss. And if you tell me you don’t dig it, I’ll tell you to shut your pie hole!” —GUY FIERI

Praise for You Wanna Piece of Me?:
“When I think of pie, I think of good old-fashioned, warm, cozy, home cooking filled with LOVE. And I think of my mom, my granny, and my best friend (who makes the messiest but most filled with love pies ever). Just a few pages into this book, I got the same feeling I did with my own cookbook: that food is love (or in this case, pie is love.) Not to mention, the photography is out of this world, and Jenell’s quirky quotes will give you a little giggle. I can’t wait to make memories with this book.” —JILLIAN HARRIS

“Jenell knows pies—from classic baking techniques to innovative flavors and pairings. And now you can create The Pie Hole magic at home with her delicious, foolproof recipes!” —TESSA HUFF, AUTHOR OF LAYERED AND ICING ON THE CAKE
“This book is full of useful tips and tricks, and the recipes are as down to earth as they are full of spunk! Whatever comfort food you can think of, Jenell turns it into a pie! It’s sweet, it’s fun, it’s vintage—and you want a piece of it!” —MIJUNE PAK, FOOD CRITIC AND FOOD NETWORK CANADA PERSONALITY

“If pie is your religion, you’ll definitely be worshipping at Jenell Parsons’ altar! You Wanna Piece of Me? is the most inspiring and visually captivating pie bible out there! Pick up a copy and start leading a very pie-us life!” —ROSIE DAYKIN, AUTHOR OF BUTTER BAKED GOODS, BUTTER CELEBRATES! AND LET ME FEED YOU

"Parsons offers readers the secrets behind her Guy Fieri-approved savoury and sweet pies. From bacon cheeseburgers to raspberry crumble plus an Elvis-inspired confection and even a poutine pie, no flavour combo is off the table."— CHATELAINE

"Don't mess with Jenell Parsons, owner of The Pie Hole...she brings her a-game with You Wanna Piece of Me?."—THE SPRUCE EATS

"From pastry to plate, get guided on bringing the signature smells and tastes of The Pie Hole into your very own kitchen."—VITA