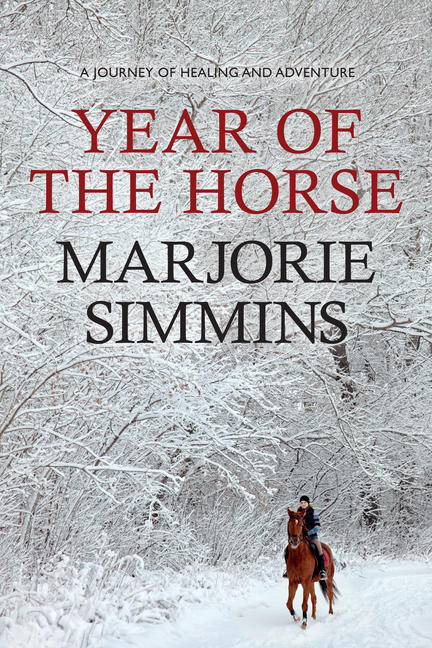 After a severe horseback riding accident in 2011, journalist and author Marjorie Simmins finds herself unable to walk. During the slow months of recovery, Simmins replays a lifetime of memories related to her beloved horse companions and the adventures they shared. Finally back on her feet, she makes a bold and surprising decision: she will ride again, in a discipline that is new for her, and she will even compete in a horse show--her first in 42 years. Vancouver-raised Simmins decides that 2014, the Chinese Year of the Horse, is her time for a comeback. Exhilarated but nervous, the former hunter-jumper of modest ability commits to full-time training as a Western rider.

Dynamic and lyrical, Year of the Horse shares the heart-lurching highs and lows of a 55-year-old horsewoman determined to put the pain behind her and to create the sunniest of futures with new, extraordinary horses in it. Onboard Winnie, a dazzling quarter horse palomino, she grows stronger and more capable again. The mare challenges Simmins and pushes her to the edge of her emotional and physical limits.

Simmins' initially modest goals take fire and she finds the support of a whole new horse community across Nova Scotia. These individuals welcome her, with a warmth that reminds her of the vibrant horse community of Southlands in Vancouver, where she rode in the 1970s, '80s, and '90s. Year of the Horse is written for every horsewoman or -man who's had a serious setback and never lost the love of the sport, or the animal. It's for every person who at some point has had a serious physical or emotional injury and said, "I can't heal, I can't go forward" and then did.

Marjorie Simmins began her thirty-year career as a freelance journalist in Vancouver, with regular work published in the Vancouver Sun and in trade magazines. She has since published numerous essays and articles in magazines, newspapers, and anthologies, and won gold medals at both the National Magazine Awards and the Atlantic Journalism Awards. Simmins is the author of Coastal Lives, Year of the Horse, and Memoir: Conversations and Craft. She is also a lifelong equestrian, starting with a focus on English riding, and latterly, focusing on Western disciplines.

Other titles by Marjorie Simmins

A Harness Racing Legend from a One-Horse Stable