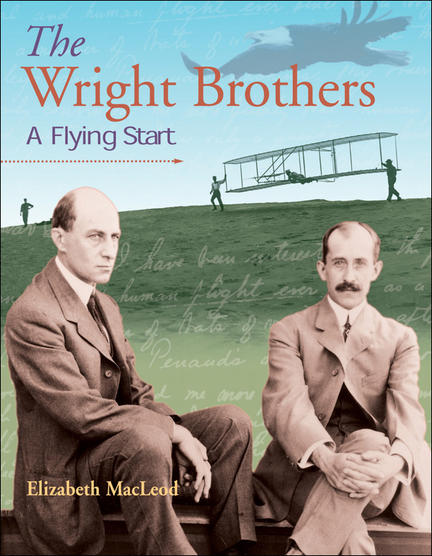 As young men, Orville and Wilbur Wright had a dream. They believed that one day people would fly, and they were determined to be the first. Despite setbacks that would have discouraged many inventors, the Wright brothers' dream came true. From a windy sand dune near Kitty Hawk, North Carolina, they made a short 36-meter flight — and flew into aviation history.
This biography in the Snapshots: Images of People and Places in History series uses photographs, newspaper clippings, maps, quotes and drawings to explore the Wright brothers' struggles. Also included are timelines of their lives and the history of flight, and a listing of pertinent Web sites.

Although most libraries own several books on the Wright brothers, few of them can rival this one for clarity of text and variety of illustration. An excellent time line on the lives of the Wright brothers and the history of light is included. With its wealth of illustrative material, this title will especially appeal to reluctant readers and browsers.

Full of interesting facts and well-captioned, period photos, this book is a good starting point for information on the lives and accomplishments of Wilbur and Orville Wright.

No ordinary Biography of the Wright brother, this account features a scrapbooklike layout that will appeal to reluctant readers.

The Wright Brothers (Kids Can Read 3)

Wilbur Wright (1867-1912) and Orville Wright (1871-1948) realized their dream of flight when they flew their airplane, the Flyer, at Kitty Hawk, North Carolina, in 1903. Their invention, the airplane, is one of the most important machines ever created. Coloured illustrations and quick facts about the duo are included.