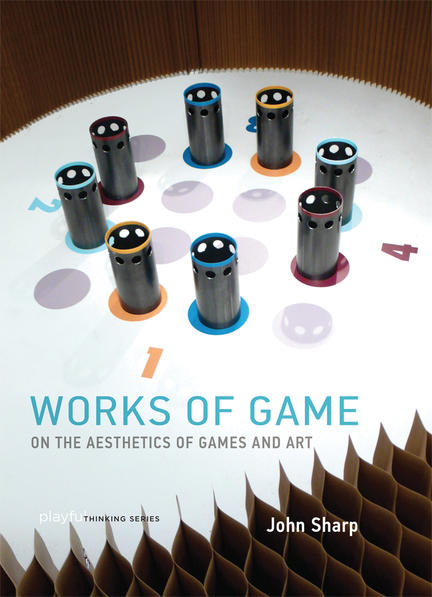 An exploration of the relationship between games and art that examines the ways that both gamemakers and artists create game-based artworks.

Games and art have intersected at least since the early twentieth century, as can be seen in the Surrealists' use of Exquisite Corpse and other games, Duchamp's obsession with Chess, and Fluxus event scores and boxes—to name just a few examples. Over the past fifteen years, the synthesis of art and games has clouded for both artists and gamemakers. Contemporary art has drawn on the tool set of videogames, but has not considered them a cultural form with its own conceptual, formal, and experiential affordances. For their part, game developers and players focus on the innate properties of games and the experiences they provide, giving little attention to what it means to create and evaluate fine art. In Works of Game, John Sharp bridges this gap, offering a formal aesthetics of games that encompasses the commonalities and the differences between games and art.

Sharp describes three communities of practice and offers case studies for each. “Game Art,” which includes such artists as Julian Oliver, Cory Arcangel, and JODI (Joan Heemskerk and Dirk Paesmans) treats videogames as a form of popular culture from which can be borrowed subject matter, tools, and processes. “Artgames,” created by gamemakers including Jason Rohrer, Brenda Romero, and Jonathan Blow, explore territory usually occupied by poetry, painting, literature, or film. Finally, “Artists' Games”—with artists including Blast Theory, Mary Flanagan, and the collaboration of Nathalie Pozzi and Eric Zimmerman—represents a more synthetic conception of games as an artistic medium. The work of these gamemakers, Sharp suggests, shows that it is possible to create game-based artworks that satisfy the aesthetic and critical values of both the contemporary art and game communities.

John Sharp is Associate Professor in the School of Art, Media, and Technology at Parsons School of Design at the New School. He is the author of Works of Game: On the Aesthetics of Games and Art (MIT Press) and coauthor (with Colleen Macklin) of Games, Design, and Play: A Detailed Approach to Iterative Game Design and (with David Thomas) Fun, Taste, & Games: An Aesthetics of the Idle, Unproductive, and Otherwise Playful (MIT Press). Sharp and Macklin are Codirectors of the PETLab (Prototyping Education and Technology Lab) at Parsons.

Overall, the book is a compelling text for both academics and game culture aficionados who are interested in concepts of game design and contemporary art.—ARLIS NA Reviews—

Other titles by John Sharp

An Aesthetics of the Idle, Unproductive, and Otherwise Playful