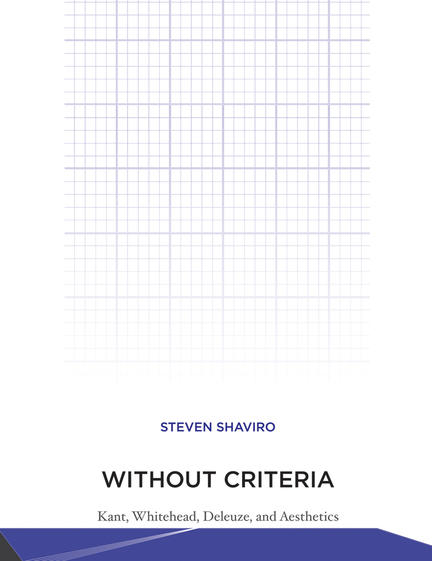 In Without Criteria, Steven Shaviro proposes and explores a philosophical fantasy: imagine a world in which Alfred North Whitehead takes the place of Martin Heidegger. What if Whitehead, instead of Heidegger, had set the agenda for postmodern thought? Heidegger asks, “Why is there something, rather than nothing?” Whitehead asks, “How is it that there is always something new?” In a world where everything from popular music to DNA is being sampled and recombined, argues Shaviro, Whitehead's question is the truly urgent one. Without Criteria is Shaviro's experiment in rethinking postmodern theory, especially the theory of aesthetics, from a point of view that hearkens back to Whitehead rather than Heidegger. In working through the ideas of Whitehead and Deleuze, Shaviro also appeals to Kant, arguing that certain aspects of Kant's thought pave the way for the philosophical “constructivism” embraced by both Whitehead and Deleuze.

Kant, Whitehead, and Deleuze are not commonly grouped together, but the juxtaposition of them in Without Criteria helps to shed light on a variety of issues that are of concern to contemporary art and media practices.

Steven Shaviro is DeRoy Professor of English at Wayne State University. He is the author of Passion and Excess: Blanchot, Bataille, and Literary Theory and The Cinematic Body.