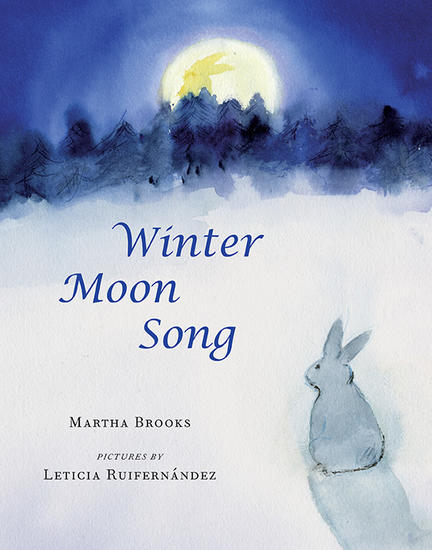 Have you ever seen the rabbit-in-the-moon? Folktales from many cultures explain how the rabbit came to be there. When award-winning novelist Martha Brooks heard one such tale, she was inspired to write her own lovely story about a little rabbit who finds a special way to brighten the darkest month of the year.

A little rabbit asks his mother how the shape of a rabbit came to be on the moon. She tells him the story of Great Mother Creator Rabbit, who came down to earth to see how her creatures lived. Finding herself cold and hungry, she built a fire, placing a stewpot on top. Another rabbit, seeing her predicament, took it upon himself to save her and jumped into the pot. But before he could perish, Great Mother Rabbit tossed him up into the moon.

The little rabbit’s mother explains that this is why all the rabbits now gather to hear the choir sing “Winter Moon Song,” to bring light and a little magic at the darkest time of the year.

The next night all the rabbits gather to hear the ancient song, and the little rabbit takes his place in the choir. But at the end of the performance, he feels a little disappointed. It had been beautiful, but did not seem all that special, and certainly not magic.

In the wintry air outside the gathering place, the little rabbit looks up at the rabbit-in-the-moon and is suddenly inspired to sing the song once more, very tentatively at first, and then more courageously. Some of the other rabbits, even the old ones, join in; some are moved to tears. And in singing the song anew, they realize the joy in being one great rabbit family.

Leticia Ruifernandez has graced the story with her tender illustrations.

Martha Brooks lives in Winnipeg. Her book Traveling on into the Light was named to the international 1996 IBBY Honour List and is an American Library Association Best Book for Young Adults. Two Moons in August and Paradise Caf and Other Stories were Governor General’s Award nominees; the latter also received the 1991 Boston Globe Horn Book Award for distinguished children’s fiction. When not writing, Martha can be found performing in local jazz clubs. Maureen Hunter is one of Canada’s most successful playwrights. Her work has been produced extensively on Canada’s major stages, in the United States, and Britain, and by CBC and BBC Radio. Atlantis was a finalist for the Governor General’s Award and Transit of Venus, premiered by the Manitoba Theatre Centre, became the first Canadian play ever staged by the Royal Shakespeare Company of Britain. A native of Saskatchewan, Maureen now lives on the banks of the Red River in Winnipeg.

Leticia Ruifernández has illustrated more than twenty-five books, mainly for children, published in Spain and South America. She won the Ciudad de Alicante Award for her illustrations in Cuento hasta tres, and was recognized by the International German Youth Library with a White Ravens selection for her illustrations in Picuyo. She lives with her family in Cáceres, Spain.

The perfect story to share during the winter months or as part of a study of traditional tales from around the world.

Winter Moon Song is a wonderful tribute to music and the beauty of the winter landscape.

Quiet but joyful . . . A subtle tale, perhaps best read to a thoughtful child in the intimate setting of a winter bedtime.

Other titles by Martha Brooks

A Year of Living and Remembrance

Paradise Café and Other Stories

True Confessions of a Heartless Girl

I Met A Bully on the Hill