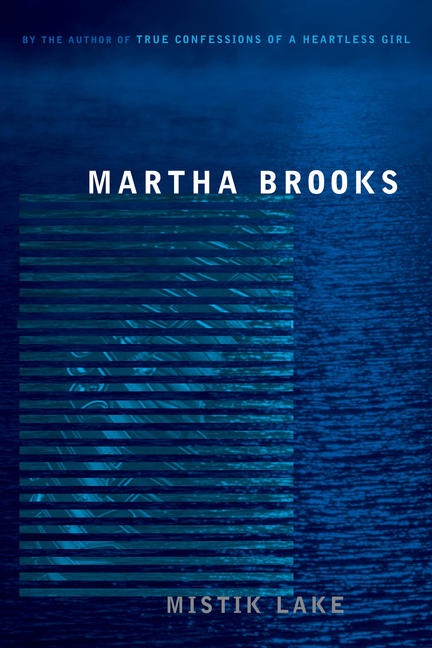 Canadian Library Association YA Book of the Year

In 1981, sixteen-year-old Sally McLean is in a car full of teenagers when it plunges through the ice to the bottom of Mistik Lake. Sally is the only survivor.

Many years later, Sally's teenaged daughter, Odella, is left wondering whether the accident is to blame for her mother's life as a sad alcoholic who eventually abandons her family and flees to Iceland with another man. When Sally suddenly dies in an accident, Odella, her father and her two younger sisters are almost overwhelmed with grief and confusion, until three people provide help and healing in unexpected ways.

Martha Brooks lives in Winnipeg. Her book Traveling on into the Light was named to the international 1996 IBBY Honour List and is an American Library Association Best Book for Young Adults. Two Moons in August and Paradise Caf and Other Stories were Governor General’s Award nominees; the latter also received the 1991 Boston Globe Horn Book Award for distinguished children’s fiction. When not writing, Martha can be found performing in local jazz clubs. Maureen Hunter is one of Canada’s most successful playwrights. Her work has been produced extensively on Canada’s major stages, in the United States, and Britain, and by CBC and BBC Radio. Atlantis was a finalist for the Governor General’s Award and Transit of Venus, premiered by the Manitoba Theatre Centre, became the first Canadian play ever staged by the Royal Shakespeare Company of Britain. A native of Saskatchewan, Maureen now lives on the banks of the Red River in Winnipeg.

...elegaic...Brooks doesn't judge the failings of her characters harshly. Rather she lovingly reveals the hidden forces that drive them. This title...demonstrate[s] how we are all shaped by complex motivations that often take us years to understand.

...absolutely perfect summer reading...Mistik Lake is magical, an absorbing, surprising story...An intriguing plot and characters that seem to have walked straight out of real life make this novel immensely readable; Brooks's poetic language and wise understanding of the heart make it superb.

Smooth writing contributes much to a story that will enable readers to care about...coming of age.

Writing stories about finding hope in difficult circumstances is what Martha Brooks does best.

This is a beautifully written tale of grief, love, and family secrets.

...beautifully crafted...An exceptional writer, Brooks once again immerses readers in a fully realized fictional world and leaves them potentially wiser for the experience.

...expands its exceedingly well-told tale of teenage romance with equally absorbing stories of adults who have played the tricky game of love.

Brooks captures perfectly the excruciating pain of divorce for children, the ache of older adolescence, the loss of childhood, and the centrality of family love. A must-read on its way to many awards. Highly Recommended.

Brooks' affecting novel explores the weighty legacy of family secrets and cultural heritage...Readers will connect strongly with the teenager's astonished, powerful feelings of first love and her shocked realization that painful family burdens can also be life-changing gifts.

Brooks knows the adolescent mind and heart. She also knows the strength and restorative power of family and community. In Mistik Lake, she gives us both - and treats sensitive issues with unblinking forthrightness.

I believe [Mistik Lake] should win every prize in Canada this year; it richly deserves it...A rich, delicious read...Perfect for summer reading...

A master storyteller, Brooks has spun a heart-warming and thought provoking tale with characters that we care about. Not only will this novel strike a familiar chord with many readers, but it will also linger in their minds long after they finish the book.

The progression of the plot, as it moves from loss and anger through gradual understanding to an incandescent moment of reconciliation in the very last line, is silky smooth. The various pieces click together at last to make a surprising and deeply satistfying pattern...a wonderfully absorbing read.

Everyone suffers, but the momentum remains steady and, in the end, it is the author's ability to convey the characters' love for one another, as complicated as it often is, that floats to the top.

Mistik Lake is such a wonderfully absorbing read you want to spend more time with even the minor characters, and the prose is so pure, the dialogue so sharp and funny, you're carried along in perpetual pleasure. Like Barbara Kingsolver and Ursula LeGuin, Martha Brooks makes us emerge from her novels a little more in love with the world, a little more rueful about its follies, a little more hopeful about the possibilities of redemption. It will be astonishing, and deeply wrong, if Mistik Lake doesn't win huge numbers of readers as well as its own swath of prizes and honours.

...a seductive and emotional five-star novel.

Mistik Lake reminds us of what it is that makes Brooks the writer she is. Here, again in luminescent prose, Brooks digs deep into love, death and loss, and here, again, she offers both her protagonist and her readers the resolution and solace possible after great pain.

It is the rare young adult novel that so perfectly combines teen sensibilities and edginess and lust and dreams with an elegance of language and an unforgettable sense of place. Mistik Lake is truly a unique gem of a book.

(reviewed from uncorrected manuscript) The newest book by Governor General Award-winning author Martha Brooks uses the alternating points of view of three characters to tell a story of love, loss and secrets in the community of Mistik Lake, Manitoba.

Odella, the first narrator, offers the reader a clear picture of her life through a series of vignettes describing moments at different stages of her life, beginning at age nine. On her eighteenth birthday, the stories of her mother and great aunt all connect, and the secrets which they had been hiding surface, and turn her world upside down. Though relayed as separate stories, Brooks skilfully interweaves the three points of view, bringing a sense of fluidity and interconnectedness to the novel, without being repetitive.

The biggest strength of Brooks’s writing is the subtle detail that allows readers to make their own inferences about these connections before reaching the end. Secrets are, in fact, the big connector in this novel. There is not a single character without the burden of secrets, and those secrets create obvious tensions in their relationships, though the causes of those tensions are not immediately apparent to the reader or to the characters themselves.

The shifting styles of narration also add to the suspense and interest of the novel. Odella is the only character who narrates her own story, and relays it in present tense. Aunt Gloria’s story begins in a similar fashion, but with an introductory first paragraph which gets inside her head, before becoming a slightly more dispassionate narrative. Sally, whose own secrets and burdens impacted her entire family (and particularly Odella’s) never actually speaks for herself. Her story is slowly revealed through the recollections and memories of the rest of the characters, suggesting that she, and not Odella, is actually at the centre of the story.

The literary and episodic style might prove challenging for the average teenage reader; nevertheless, Mistik Lake is a well-written, thought provoking novel that can foster excellent discussion.

When her alcoholic mother dies in an accident, Odella’s family is nearly overwhelmed with grief and confusion until three people provide help and healing in unexpected ways.

Other titles by Martha Brooks

A Year of Living and Remembrance

Paradise Café and Other Stories

True Confessions of a Heartless Girl

I Met A Bully on the Hill