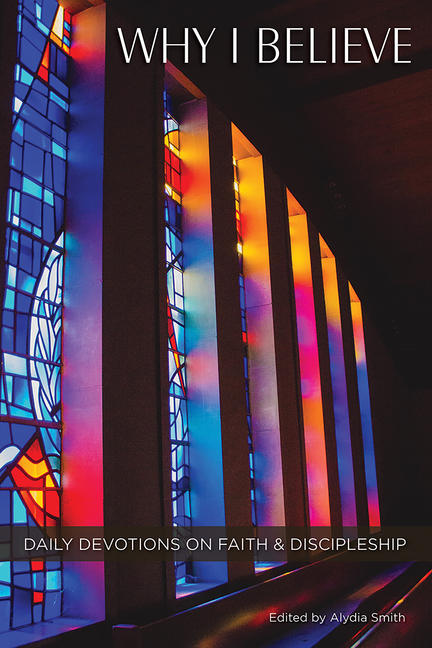 In this devotional, a variety of members and friends of the church told us about their personal faith journeys. We are excited to share their candid, thoughtful reflections. What does it mean to follow Jesus, remain faithful, and choose hope, especially during times of uncertainty and doubt? Daily devotions for the season of Lent include a scripture passage, personal reflection, song suggestions, reflection question, and prayer, Study guide included.

Alydia Smith wrote the preface and prayers. Alydia is a worship leader, educator, caregiver, and Jesus-follower who serves as the Program Coordinator for Worship, Music and Spirituality for the United Church. She holds a bachelor’s in music, a master’s in divinity from the Atlantic School of Theology, and a doctorate in worship from Drew University under the mentorship of Donald Hilliard and Leonard Sweet. Alydia loves learning and is always looking for new opportunities to grow.

Excerpt: Why I Believe: Daily Devotions on Faith & Discipleship (edited by Alydia Smith)

PREFACE Many have entrusted their stories and shared their talents to create this collection of devotions. We are excited to share the resulting book with you! We hope it evokes what it means to be faithful and to choose hope, especially during times of uncertainty. When we were picking a title, I struggled with Why I Believe, but after reflection, I now think that it is perfect. At first I thought it sounded too close to “What I believe” or “How I believe,” and I did not want to give the impression that this is a devotional book based on a creed or faith statement, rather than a book about the diverse faith journeys of United Church people. Also, I struggled with the word “believe.” Personally, I often associate belief with something that I can systematically deduce, debate, and defend, and faith with a more personal gut feeling or instinct that is harder to articulate. The devotions in this book provide intimate glimpses into the faith of United Church folks, and I was afraid that the word “believe” would make readers expect dogma instead of exploration. But I was forgetting the power of personal testimony. The beliefs of others—especially people who are very different from myself—rarely sound rational at first, but because of that, they have a powerful effect. When I was 18, weeks before my final dance exam, my dance teacher earnestly told me that she believed I would pass, even though I had given her no rational reason to trust that I would. (I was, without competition, her least competent and least graceful student.) Although I did not want to take the exam, her baffling belief, and my trust in her, increased my faith in my own ability. I took and passed that exam. The mysterious beliefs of others have a way of increasing our imaginations for what is possible by opening new perspectives. In this book, a diverse collection of people who identify with the United Church (see their bios at the back) share glimpses of why they believe. I hope that their candid and honest reflections will introduce you to some new perspectives that will help to increase your faith. Alydia Smith, Worship, Music, and Spirituality, The United Church of Canada

Other titles by Alydia Smith

Daily Devotions Framed by the Movies