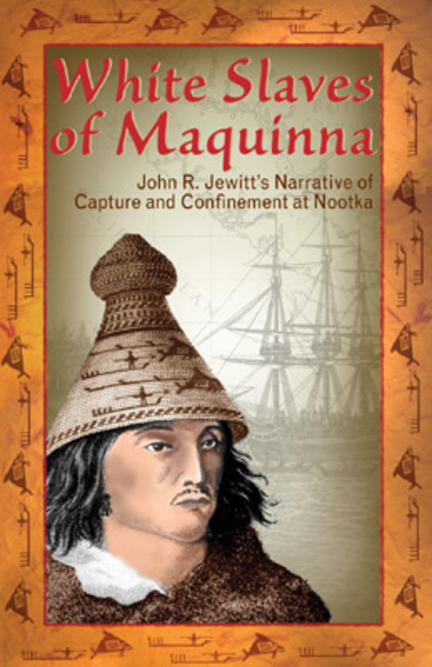 John R. Jewitt's story of being captured and enslaved by Maquinna, the great chief of the Mowachaht people, is both an adventure tale of survival and an unusual perspective on the First Nations of the northwest coast of Vancouver Island.

On March 22, 1803, while anchored in Nootka Sound on the west coast of Vancouver Island, the Boston was attacked by a group of Mowachaht warriors. Twenty-five of her 27 crewmen were massacred, their heads "arranged in a line" for survivor John R. Jewitt to identify.

Jewitt and another survivor, John Thompson, became 2 of some 50 slaves owned by the chief known as Maquinna. Among other duties, they were forced to carry wood for three miles and fight for Maquinna when he slaughtered a neighbouring tribe. But their worst fear came from knowing that slaves could be killed whenever their master chose. Since most of the Mowachaht wanted the two whites dead, they never knew what would come first—freedom or death.

After Jewitt was rescued, following 28 months in captivity, he wrote a book of his experiences. It appeared in 1815 and became known as Jewitt's Narrative. It proved so popular that it is still being reprinted today.

Born on May 21, 1783, John Rodgers Jewitt was the son of Edward Jewitt, a blacksmith in Lincolnshire, England, who wanted his son to further his education and become a surgeon. When his father moved his business to the seaport of Hull, John heard the call of the sea and signed on as the armourer on the Boston, an American sailing ship that left England and rounded Cape Horn for what was then called Vancouver’s Island.

John began his journal on June 1 using ink he made by boiling and filtering plant and berry juices with powdered coal. He entered the historical record with his memoirs about the 28 months he spent as a captive of Maquinna of the Nuu-chah-nulth people on the Pacific coast of what is now Canada. His memoir is a major source of written information about the indigenous peoples of the Pacific Northwest Coast.

Although he had an Aboriginal wife at Nootka, John married Hester Jones on Christmas Day, 1809. John Jewitt died January 7, 1821, in Hartford, Connecticut.