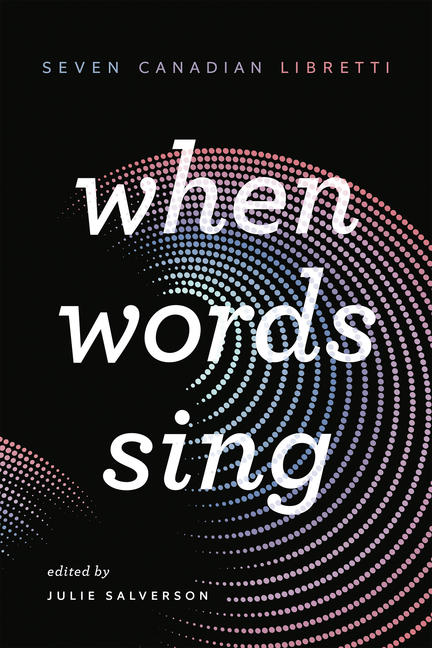 Meet the creators behind the words of Canadian opera in this exciting new collection of contemporary libretti. Featuring Ours by Robert Chafe, Rocking Horse Winner by Anna Chatterton, Beatrice Chancy by George Elliott Clarke, Missing by Marie Clements, Nigredo Hotel by Ann-Marie MacDonald, Shelter by Julie Salverson, and Dog Days by Royce Vavrek, When Words Sing turns the spotlight on everything that goes into writing libretti, answering frequently asked questions along the way.

Through supplementary interviews, essays, and illustrations, the book will examine the role of the librettist; how a libretto can inspire a composer, director, and designer; and how the relationship between words, music, sound, and design coalesces into an ageless theatrical form.

Julie Salverson is a writer, speaker, teacher and workshop leader who has worked in professional and community engaged performance for many years. Her theatre, opera, and essays embrace the relationship of imagination and foolish witness to stories of violence. Her book Lines of Flight, An Atomic Memoir (Wolsak & Wynn) follows her journey tracing uranium from the Northwest Territories to Hiroshima while unearthing the secrets of her childhood, burning out as an activist and finding beauty in haunted places. She runs workshops for groups practising resiliency through drama. She has published many essays about how to witness a terribly beautiful world as well as the role of clown and courage in facing difficulty. She is a professor of drama at the Dan School of Drama and Music at Queen’s University and is based in Kingston, Ontario.

Other titles by Julie Salverson