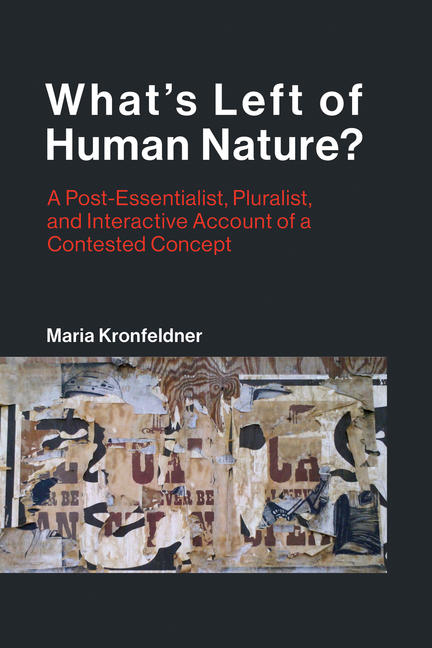 A philosophical account of human nature that defends the concept against dehumanization, Darwinian, and developmentalist challenges.

Human nature has always been a foundational issue for philosophy. What does it mean to have a human nature? Is the concept the relic of a bygone age? What is the use of such a concept? What are the epistemic and ontological commitments people make when they use the concept? In What's Left of Human Nature? Maria Kronfeldner offers a philosophical account of human nature that defends the concept against contemporary criticism. In particular, she takes on challenges related to social misuse of the concept that dehumanizes those regarded as lacking human nature (the dehumanization challenge); the conflict between Darwinian thinking and essentialist concepts of human nature (the Darwinian challenge); and the consensus that evolution, heredity, and ontogenetic development result from nurture and nature.

After answering each of these challenges, Kronfeldner presents a revisionist account of human nature that minimizes dehumanization and does not fall back on outdated biological ideas. Her account is post-essentialist because it eliminates the concept of an essence of being human; pluralist in that it argues that there are different things in the world that correspond to three different post-essentialist concepts of human nature; and interactive because it understands nature and nurture as interacting at the developmental, epigenetic, and evolutionary levels. On the basis of this, she introduces a dialectical concept of an ever-changing and “looping” human nature. Finally, noting the essentially contested character of the concept and the ambiguity and redundancy of the terminology, she wonders if we should simply eliminate the term “human nature” altogether.

Maria Kronfeldner is Associate Professor in the Department of Philosophy at Central European University, Budapest.

engaging and ambitious...Kronfeldner's book is sophisticated and well argued, making it a valuable resource.—BRITISH JOURNAL FOR THE PHILOSOPHY OF SCIENCE—

Maria Kronfeldner's book masterfully engages and reorients the post-Hull treatment of this issue... The synoptic quality of Kronfeldner's text makes it a landmark contribution to the human nature debate among contemporary philosophers of biology… Kronfeldner's work is a laudable addition to this tradition.

What's Left of Human Nature? is an invaluable contribution to the human nature literature. It is a unifying volume, bringing order and structure to a vast discussion spread across multiple empirical and philosophical literatures. It is rigorously signposted, scrupulously organised, and to its credit, keenly sensitive to contemporary concerns. Useful as a guide to the terrain, I am confident the book will also serve as a platform for the next generation of debates around the human nature concept; both for those wanting to keep it, and those wanting to eliminate it.

—International Studies in the Philosophy of Science—