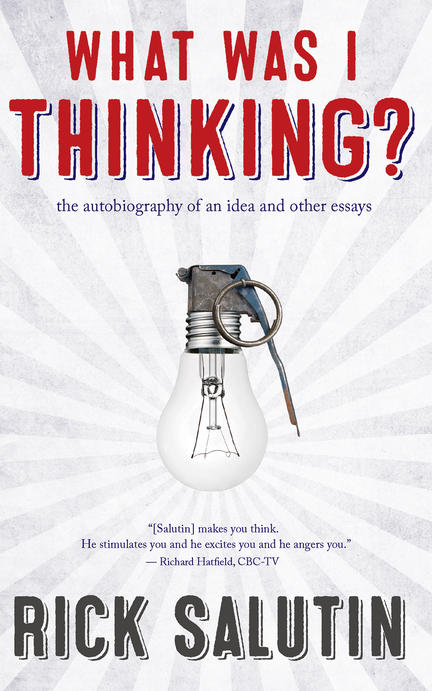 A lifetime of engagement with religion, philosophy, and activism in a series of fascinating reflections.

Brilliant, fractious, mordantly funny, playwright/novelist/essayist Rick Salutin has been Canadian journalism’s agent provocateur for over three decades. Whether needling governments and politicians, holding public policy to account, or decrying the shortfalls of activist thought and action, he has been one of the most outspoken commentators of his generation.

In What Was I Thinking?, Salutin reveals his curiosity about both the world of the mind and the world of the here and now. His life has been graced with contact with extraordinary people from Hannah Arendt to Holocaust theologian Emil Fackenheim to goalkeeper-politician Ken Dryden, and we discover the profound influence their thought has had on his. but he has also had encounters with Conrad Black and Peter Worthington, joined his fellow coffee-drinkers in the infamous fight to save the west-end institution Dooney’s from displacement by Starbucks, and taken furious potshots at the political pandering of the nation’s media outlets.

This is classic Salutin and most of it hasn’t been published before — including a lengthy personal and historical essay on the world of therapy. It’s a wonderful roller-coaster ride of thought and opinion. Step on!

Rick Salutin has written award-winning drama (Les Canadiens, 1837), fiction (A Man of Little Faith) and journalism (op-ed columnist for The Globe and Mail from 1991-2010 and the Toronto Star since then). He has taught almost continuously, in some manner, since he was about 15, including a course in the Canadian Studies program at University College, the University of Toronto, since 1978.

“To say that you find his opinions informed, measured, and usually accurate, as this reviewer does, doesn't necessarily mean you have journeyed down the same intellectual roads, but that you have come to similar conclusions nevertheless.” — Quill & Quire

"While the governing philosophy in the collection — that it is crucial to examine personal and cultural bias and the limitations of our thinking and to allow that our thinking can and will change depending on our life’s circumstances — may seem obvious, it bears repeating in an age of fiercely guarded prejudices and fearful, intractable minds." — Literary Review of Canada

Other titles by Rick Salutin

Keeping the Public in Public Education

A Man of His Time

A History, A Play