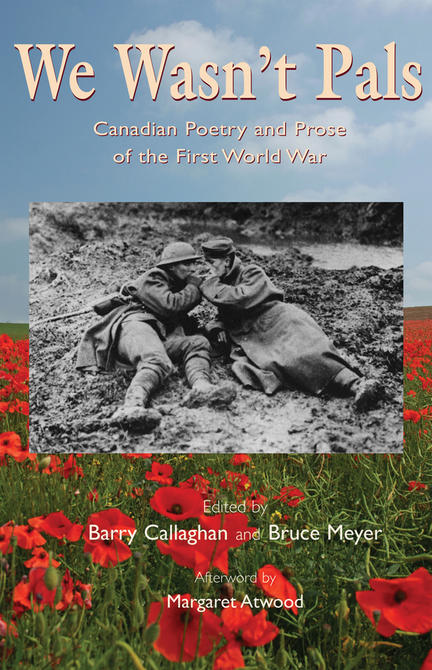 Ignored by critics and readers of the time, these poems were written by Canadians who witnessed the horror of World War I first-hand, forming an anthology in which the forgotten experiences of a decade are finally remembered.

BARRY CALLAGHAN founded the internationally celebrated literary quarterly, Exile, and imprint, Exile Editions, while he was a war correspondent in the Middle East and Africa in the 1970s. He is a novelist, poet and journalist and his work has been much anthologized. His numerous awards include Toronto’s One Hundred Outstanding Citizens Award, the inaugural W. Mitchell Award and the Foundation For The Advancement of Canadian Letters Award for Fiction which he was honoured with twice.

From 1996 to 2003, he was Director of the Writing and Literature Program at the University of Toronto School of Continuing Studies where he created and managed programs in Creative Writing, Professional Writing and Literary Studies. In 2000, he gave the annual Whidden Lecture at McMaster University, a distinction previously bestowed on Robert J. Oppenheimer, Hans Selye, Tom Stoppoard and Bruno Bettelheim. He is currently Artistic Director of the annual Leacock Summer Festival of Canadian Literature in Orillia, Ontario. A frequent broadcaster on CBC Radio One, his conversations, The Great Books (three volumes), A Novel Idea, andGreat Poetry: Poetry is Life and Vice Versa with Michael Enright are the network’s best-selling audiocassette and cd spoken word series. He has also been a regular literary personality on TV Ontario’s More to Life.

In addition to his teaching and broadcasting activities, Meyer has published twenty-seven books of poetry, fiction, non-fiction, textbooks and anthologies, and critical monographs. His poetry collections are The Open Room (1989), Radio Silence (1991), The Presence (1996), Anywhere (2000), The Spirit Bride (2002), Oceans (2004), and As Yet, Untitled…(2006), and he has published three poetry chapbooks, The Tongues Between Us (1981), The Aging of America (1982), and with James Deahl and Gilda Mekler, Steel Valley (1984). He has published two collections of short fiction: Goodbye Mr. Spalding (1996) and Flights (2005). With Barry Callaghan, he co-edited The Selected Poems of Frank Prewett (1997 and 2001), and the first anthology of World War One Canadian writing to be published since 1918, We Wasn’t Pals: Canadian Poetry and Prose of the First World War (2001). With Jonathan Barron, he co-edited The Dictionary of Literary Biography, Volume 282: The New Formalism (2005), and with Carolyn Meyer he co-edited The Reader: Contemporary Essays and Essay Strategies (2004) and Separate Islands: Contemporary British and Irish Poetry (1988). His other works include two volumes of interviews with Canadian writers co-authored with Brian O’Riordan, In Their Words: Interviews with Fourteen Canadian Writers (1985) and Lives and Works: Canadian Authors in Conversation (1991).  With James Deahl, he co-edited the first edition of Poetry Markets for Canadians  (1984). His other works include Arrivals: Canadian Poetry (1986), The Bae Sah Moh Anthology: Young Korean Canadian Writers (2007), and an edition of James Hanley’s The German Prisoner (2007).

He has contributed to numerous scholarly reference volumes including The Oxford Companion to Canadian Literature (1983, 1997), The Oxford Companion to Twentieth Century Poetry (1996), Contemporary Poets (1993), Literature in English (1996), and Poetry for Students (1997, 1998, 1999). He has worked as an editor for Descant, Quarry, Cross-Canada Writers’ Quarterly, Poetry Canada Review, Argo (UK), The Greenfield Review (US), Edge City Review (US), The University of Toronto Review, and Acta Victoriana.

Meyer has won several prizes for his writing including the E.J. Pratt Gold Medal and Prize for Poetry (1980, 1981), the Alta Lind Cook Award for Writing (1981, 1982), the Ruth Cable Memorial Prize (1996), the Word Press Prize (2004), the Daesan Foundation International Prize for Translation (2006) and was a finalist for the Bridport Prize (2005), the Gerald Lampert Award (1989) and the T.S. Eliot Prize for Poetry (2000). His work as bibliographer for the website for the CBC’s Canada: A People’s History was part of the Baedeck Award-winning package for the best educational website. He was recipient of a Toronto Arts Council Award (2006) and an Ontario Arts Council Works-in-Progress Grant (2005), as well as numerous Ontario Arts Council Writers’ Reserve Grants. During his doctoral work he was a recipient of the Ontario Graduate Fellowship, the Social Sciences and Humanities Research Council of Canada Doctoral Fellowship, the McMaster University Graduate Fellowship, and the McMaster University Graduate Travel Fellowship. He is one of only two living Torontonians to be quoted on a Heritage Toronto marker, that to mark the site of the city’s first baseball stadium, Sunlight Park. In 1997, he received an honorary lifetime donor’s pass to the Baseball Hall of Fame and Museum in Cooperstown, New York.

He lives in Toronto with his wife Kerry and daughter Katie.

Other titles by Barry Callaghan

The Exile Book of Toronto Stories

The Way the Angel Spreads her Wings

A Kiss is Still a Kiss

Other titles by Bruce Meyer

This Will Only Take a Minute

Down in the Ground

Feast of Brief Hopes, A