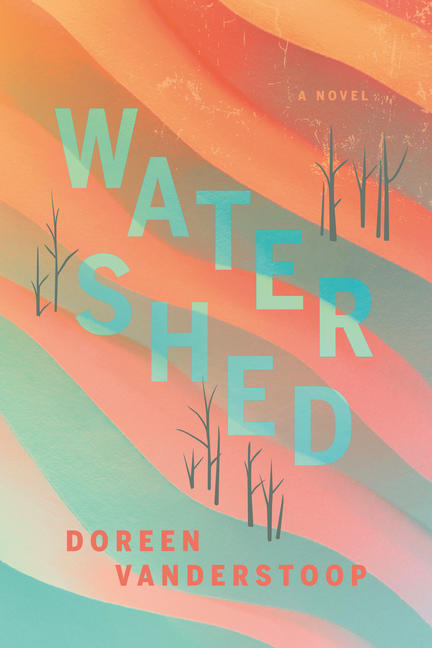 It is 2058, and the glaciers are gone. A catastrophic drought has hit the prairies. Willa Van Bruggen is desperately trying to keep her family goat farm afloat, hoping against hope that the new water pipeline arrives before the bill collectors do.

Willa's son, Daniel, goes to work for the pipeline corporation instead of returning to help the family business. When Daniel reveals long-concealed secrets about his grandfather's death, Willa's world truly shatters. She's losing everything she values most: her farm, her son, her understanding of the past — and even her grip on reality itself. Vividly illustrating the human cost of climate change, Watershed is a page-turner of a novel about forgiveness, adaptation, and family bonds.

Doreen Vanderstoop is a Calgary-based writer, storyteller and musician. Her short fiction has been published by Loft on Eighth and Prairie Fire and has appeared online at Montreal Serai, Prairie Journal, Epiphany Magazine and others. As a storyteller/musician, she intersperses songs among tales of all genres, including her own original stories. Doreen performs for audiences of all ages at schools, libraries, festivals, conferences and more. She leads workshops to ignite in others a passion for the power of story — oral and written. Watershed is Doreen's debut novel.

"Doreen Vanderstoop takes us into a future that feels more likely every day. The Van Bruggen family could be any of us, forced to adapt to a rapidly changing world. Watershed is a timely, beautifully rendered and prescient work." — Ann Eriksson, author of The Performance

"Riveting . . . Watershed is the best kind of futuristic fiction, the kind that becomes grass-roots reality as we read." — Wayne Grady, author of Up from Freedom

"This timely novel offers both a disturbing vision of what could be our not-too-distant future, and an inspiring reminder of the strength and courage ordinary people can draw from one another during troubled times. It offers a convincing portrayal of an Alberta contending with the consequences of its long obsession with oil profits, in which water has now become the force that drives power, money and politics. Ms. Vanderstoop's dystopian novel marries love of place, the power of human relationships and the hard reality of climate change to produce a work that should challenge a lot of our contemporary obsessions. This is a cautionary tale about what really matters, rendered the more powerful by the fact that it could very well prove to be as much a work of prophecy as of fiction." — Kevin Van Tighem, author of Our Place: Changing the Nature of Alberta

"This is us with just a few more decades on the Doomsday Clock. A future too well imagined, too likeable and plausible, to disown." — Fred Stenson, author of Who by Fire