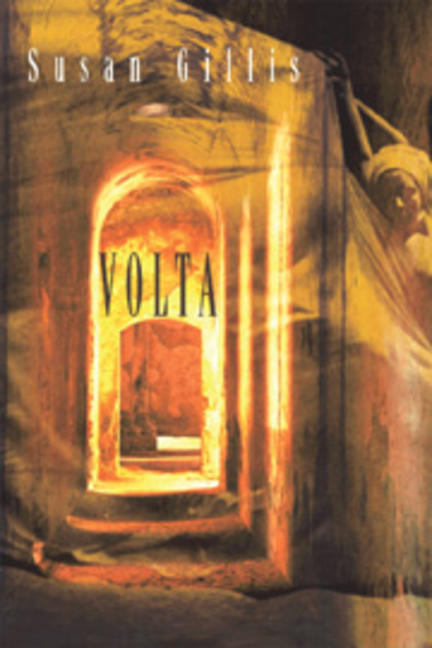 A pink bathrobe turns into a kingfisher; a kitchen floor displays the stigmata of an oncoming storm; a Stone Age axe-head surfaces in France for someone from Newfoundland to stumble over; the covers of a book vibrate through broken intimacy. Here, friendship has the power to transform; love, to disembody. In a series of radical translations of the Earl of Surrey's sixteenth-century sonnets, a garden of plastic delights uproots the pastoral scene; a gallant compliment on social pedigree translates as salacious appreciation for a chef's handling of a ripe tomato. The poems of Volta turn place and time over on themselves, examining how we make what we call home, and what it is to be in relation: to people, to place, to history. A shape-shifting speaker rejects the idea of a singular self, and invites the reader to join a quest for that hypothetical meeting-place where community beckons but is never reached.

Susan Gillis has lived on the Atlantic and Pacific coasts of Canada, and now lives most of the year in Montreal, where she teaches English. Her books include Volta (Signature Editions, 2002), which won the A. M. Klein Prize for Poetry, and Swimming Among the Ruins (Signature Editions, 2000), and a chapbook, Twenty Views of the Lachine Rapids (Gaspereau Press, 2012). Whisk, with Yoko’s Dogs, is forthcoming in 2013 from Pedlar Press. The Rapids is Susan’s third collection (Brick Books, 2012).

Once there were answers: things corresponded, the planets in motion struck heavenly chords, all was as it should be. If the humours got out of sorts, the gods laughed and fetched healing elements from the four corners; if Pan, sprung, made pandemonium, it was answered. The world is noisier now, and depleted of explanations. Who can say how we are nourished by land-mines or car-bombs? What is a bomb? Tell me, because my heart trembles. Brothers and sisters, the earth is a question that swallows sense. Walking with you in the Alberta hoodoos, laying a hand on the bark of a lodgepole pine, letting the long flowering grasses wash clean the crowded mind; world-as-it-is. You asked, I listened; this much was given. Mornings, the sun rises and traffic intensifies for a time; oceans flood, then recede; modulations without end. The world, with you in it; then kingfishers, rattling over the plain.

This is not a loss exactly

I buried the cat in the hill I look at every morning over coffee. Dug the hole, laid it in, tamped the clod over.

It used to purr when you played your tapes of Oum Khalthoum, Empress, Nightingale, Star of the Nile. You sang along

swirling the offbeats and drones I never could wrap my tongue around. I spoke like the cat

you said. I couldn't look as I buried it but now most days I can look at the hill

without thinking of it, and this is not a loss exactly.

But something spins when I look away; at the edge of hearing, a voice warms up.

“At the literal and figurative heart of Susan Gillis's estimable second book, Volta, is a series of 15 "translations" of the work of the Earl of Surrey, the 16th-century poet. These poems, however, are not exercises in academic hermeticism. Rather, these "permutations" are entirely original turns on a particularly suggestive source, "translations" into distinctively modern and passionate revisions. Throughout the quietly lyrical Volta, Gillis wears her learning both light and well. These poems bespeak a balanced, measured, and unpretentious sensibility that takes love as it principal theme”

Other titles by Susan Gillis

Twenty Views of the Lachine Rapids

Swimming Among the Ruins