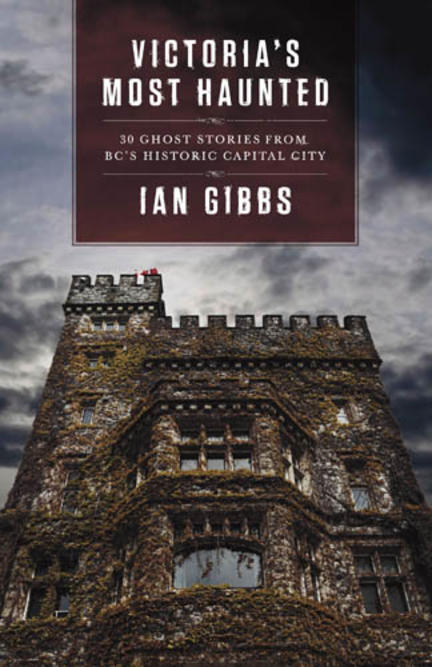 Ghost stories from Canada’s most haunted city, including tales from iconic sites such as the Empress hotel, Hatley Castle, and Ross Bay Cemetery.

Beautiful, charming Victoria is world renowned for its seaside attractions, flourishing gardens, and breathtaking ocean views. But looming behind its picture-perfect façade is a city shrouded in mystery, with restless, disembodied beings that whisper ghastly tales of mystery, violence, and horror.

Known as British Columbia’s most haunted city, Victoria is teeming with a plethora of spirits. Through this brand-new collection of disturbing tales, you’ll come face to face with:

Get to know Victoria’s best-known hauntings along with some you may have not have heard before.

Ian Gibbs was born in the United Kingdom and emigrated to Canada when he was young. He has a passion for history and the paranormal, and has always been fascinated by storytelling, ghosts, and hauntings. He lived in several city centres across the country before settling in Victoria—arguably one of the most haunted places in Canada—where he acts as a guide for Victoria’s popular Ghostly Walks tours. He is the creator and host of the podcast Ghosts ’n Bears, and author of Victoria’s Most Haunted: Ghost Stories of BC’s Historic Capital City and Vancouver’s Most Haunted: Supernatural Encounters in BC’s Terminal City.

A concise look at places both familiar and not. Gibbs has the Sixth Sense . . . [and he] recounts recent activities and his brushes with the occult world with a narrative style that’s easy to visualize.

A well-told ghost story is always a treat, and Ian Gibbs is a master storyteller. Ian’s debut collection is a terrific addition to the ghost story genre; clearly the paranormal is in this man’s blood. Victoria’s Most Haunted is chock full of spooky, thought-provoking tales that take the reader on a tour through time and place to a side of Victoria known by few, offering us a glimpse of the city just beyond the veil. Ranging from poignant to downright scary, these accounts will cast your perspective of staid old Victoria in an entirely new light.

Victoria BC is often referred to as 'charming' or 'idyllic' with its breathtaking ocean views and beautiful gardens, but after spending a bit of time with Ian Gibbs readers will be adding 'chilling' and 'haunted' to that list of descriptions. Victoria’s Most Haunted is an unsettling tour of the capital city and even you are not a believer in the paranormal you will likely find yourself peering over your shoulder next time you wander through Fan Tan Alley, Pioneer Square or any of the other landmarks with an overlooked grisly past.

Other titles by Ian Gibbs