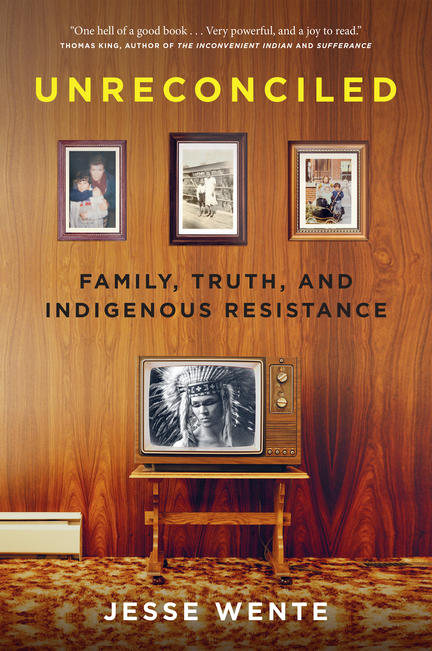 NATIONAL BESTSELLER
WINNER of the 2022 Rakuten Kobo Emerging Writer Prize for Non-Fiction
A GLOBE AND MAIL BEST BOOK OF THE YEAR
"Unreconciled is one hell of a good book. Jesse Wente’s narrative moves effortlessly from the personal to the historical to the contemporary. Very powerful, and a joy to read."
—Thomas King, author of The Inconvenient Indian and Sufferance
A prominent Indigenous voice uncovers the lies and myths that affect relations between white and Indigenous peoples and the power of narrative to emphasize truth over comfort.

Part memoir and part manifesto, Unreconciled is a stirring call to arms to put truth over the flawed concept of reconciliation, and to build a new, respectful relationship between the nation of Canada and Indigenous peoples.

Jesse Wente remembers the exact moment he realized that he was a certain kind of Indian--a stereotypical cartoon Indian. He was playing softball as a child when the opposing team began to war-whoop when he was at bat. It was just one of many incidents that formed Wente's understanding of what it means to be a modern Indigenous person in a society still overwhelmingly colonial in its attitudes and institutions.

As the child of an American father and an Anishinaabe mother, Wente grew up in Toronto with frequent visits to the reserve where his maternal relations lived. By exploring his family's history, including his grandmother's experience in residential school, and citing his own frequent incidents of racial profiling by police who'd stop him on the streets, Wente unpacks the discrepancies between his personal identity and how non-Indigenous people view him.

Wente analyzes and gives voice to the differences between Hollywood portrayals of Indigenous peoples and lived culture. Through the lens of art, pop culture, and personal stories, and with disarming humour, he links his love of baseball and movies to such issues as cultural appropriation, Indigenous representation and identity, and Indigenous narrative sovereignty. Indeed, he argues that storytelling in all its forms is one of Indigenous peoples' best weapons in the fight to reclaim their rightful place.

Wente explores and exposes the lies that Canada tells itself, unravels "the two founding nations" myth, and insists that the notion of "reconciliation" is not a realistic path forward. Peace between First Nations and the state of Canada can't be recovered through reconciliation--because no such relationship ever existed.

JESSE WENTE is an Anishinaabe writer, broadcaster, and arts leader. Born and raised in Toronto, his family comes from Chicago and Genaabaajing Anishinaabek and he is a member of the Serpent River First Nation. Best known for more than two decades spent as a columnist for CBC Radio’s Metro Morning, he also worked at the Toronto International Film Festival for eleven years. In February 2018 he was named the first Executive Director of the Indigenous Screen Office. Wente was appointed Chair of the Canada Council for the Arts in 2020, the only First Nations person to ever hold the position.

NATIONAL BESTSELLER
WINNER of the 2022 Rakuten Kobo Emerging Writer Prize for Non-Fiction
A GLOBE AND MAIL BEST BOOK OF THE YEAR
Praise for Unreconciled:

"Unreconciled is one hell of a good book. Jesse Wente’s narrative moves effortlessly from the personal to the historical to the contemporary. Very powerful, and a joy to read."
—Thomas King, author of The Inconvenient Indian and Sufferance

“With Unreconciled, Jesse Wente proves himself to be one of the most influential Anishinaabe thinkers of our time. By telling his own story, Jesse provides Canada with an essential roadmap of how to move forward  through the myth of reconciliation towards the possibility of a just country. There is much work to be done but reading Jesse’s words, soaking them in and letting them settle in your mind, will set us all on the right path.”
—Tanya Talaga, bestselling author of Seven Fallen Feathers

“Mahsi cho, Jesse Wente, for illuminating the biggest issue facing Canada’s relationship with Indigenous people: Canada fears Indigenous people because Canada is terrified of our power. Each language class, culture camp, graduation ceremony, each Supreme Court Ruling, each Treaty (that wasn't forged), each feast and naming ceremony… is part of the incredible Reclaiming happening right now. Please read this book. It's an infuriating read but a necessary one.”
—Richard Van Camp, author of The Lesser Blessed and Moccasin Square Gardens
"With Unreconciled, Jesse Wente proves he's a storyteller through and through—one who is unafraid of telling hard but necessary truths, yes, but also one who knows that vulnerability is the quickest way to the heart. Wente shares so generously with his readers in this book, braiding together his own past with the problems of the present, ultimately offering us a way forward, together."
—Alicia Elliott, author of A Mind Spread Out on the Ground
“Part biography, part social and cultural manifesto, and part film analysis, Wente’s book tells us of his journey as a mixed blood kid in Toronto facing everyday racism, to becoming the face (actually more like the voice) of Indigenous film appreciation and criticism. A slim book but heavy in what it says, Unreconciled shows how the best journeys in life are derived from the obstacles the hero overcomes.”
—Drew Hayden Taylor, author of Chasing Painted Horses and Take Us to Your Chief and Other Stories
“[A] must-read.”
—The Globe and Mail

Other titles by Jesse Wente