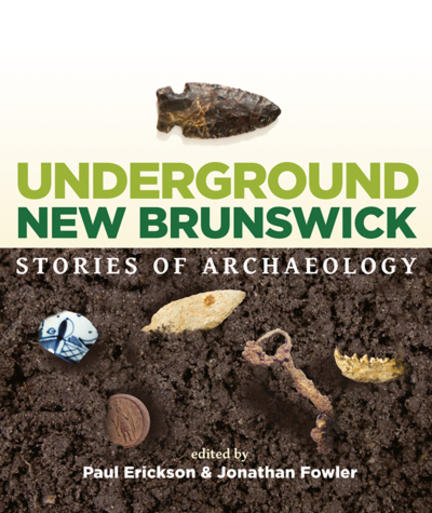 Underground New Brunswick features fifteen accessible essays from practicing archaeologists, professors, and enthusiasts detailing recent excavations and restorations from around the province. Stories range from the prolific to the downright unusual, and include the discoveries of New Brunswick’s most famous treasure-hunter, the preservation of a Golden Hawk aerobatic jet, and a Miramichi forensic investigation aided by a psychic. The collection also features recent work at some of the province’s National Historic Sites, such as Wolostoq, Augustine Mound, Forts La Tour and Jemseg, and Fredericton’s Old Government House.

Including over 100 photographs of excavation sites, historical documents, and recovered artifacts, as well as a glossary, educational sidebars, and recommended readings, Underground New Brunswick will widen the horizons of archaeology enthusiasts and history lovers.

Paul Erickson is professor and chair of the anthropology department at Saint Mary's University. He holds degrees from four universities, including a doctoral degree from the University of Connecticut. His academic and community interests include educational anthropology, urban archaeology, and the history and built heritage of Halifax. Dr. Erickson is the author or editor of more than ten books, including Historic North End Halifax and Underground Halifax.

Jonathan Fowler is a historical archaeologist who teaches at Saint Mary’s University. He holds degrees from Saint Mary’s, Acadia University, the University of Sheffield, and the University of Oxford and has wide-ranging interests in the fields of archaeology, anthropology and history. For the past decade, Jonathan has directed archaeological excavations at Grand-Pré National Historic Site. He is the co-author, with Paul Erickson, of two popular books on regional archeology, Underground Nova Scotia and Underground New Brunswick.

Other titles by Paul Erickson

Stories of Archaeology in the City

Other titles by Jonathan Fowler