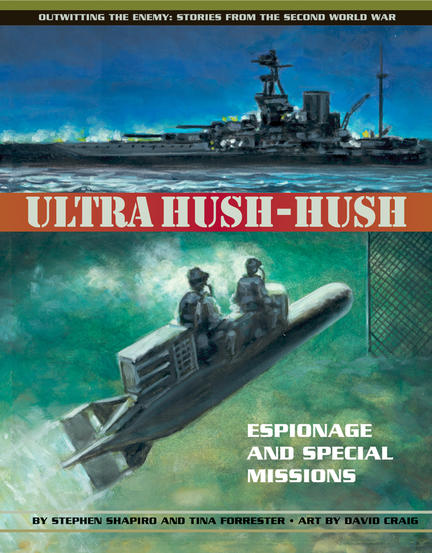 Spies! Special Missions! Codes and Ciphers! History comes to life with 19 stories of ingenuity and intrigue from World War II.

Discover the secrets behind some of the real-life deceptions that turned the tide of World War II. Meet double-crossing secret agents like Arthur Owens (code-named Snow), who spied for both the Nazis and the British! Witness airborne assaults by daredevils such as Otto “Scarface” Skorzeny, “the most dangerous man in Europe.” Smash through “unbreakable” barriers like the A-3 Scrambler, the American encryption system used to communicate with British allies!

Each spellbinding true story is packed with information sidebars, archival photographs, and full-color maps, allowing the reader to go behind the scenes of World War II and learn the secrets that outwitted the enemy.

Stephen Shapiro holds a PhD and is the author of The Siege, Ultra Hush-hush!, Hoodwinked, and Battle Stations. He lives in Toronto.

“A very well crafted book ... and it will be enjoyed and appreciated by anyone interested in World War II generally, and espionage and special missions specifically ... The stories are very well written and carefully ensure that nothing in the way of background knowledge is taken for granted: side panels and a supplementary glossary do a nice and unobtrusive job of providing definitions ... Recommended.—CM Reviews

“Readers will be intrigued by these tales of spies, saboteurs, and double-crossings. Full-color illustrations and black-and-white photographs add interest to the text, and the liberal use of sidebars and maps will help students understand the lengths both sides went to win the war. Terms are defined as they are used, either in boxed entries or in the glossary. An introductory time line and a map of the world at war serve as reference points for the events discussed throughout the pages. Even the most reluctant readers will find something of interest within this world of secrets.”—School Library Journal

“If you want a good, all-around, solid portrayal of an often overlooked part of the fearsome battles of World War II, then this is the book you want. It is well written, well researched, well illustrated, and well worth the time you will invest in reading it, no matter how old you are.” —socialstudiesforkids.com

“[An] information-packed exploration of the ways in which espionage on all sides contributed to or impeded the war's final outcome.—The Globe and Mail

“... one of the best books available today for readers of illustrated non-fiction, a book that will interest and inform both young and adult readers alike.”—Canadian Literature

“The intellectual intrigue should appeal to most youngsters.”—National Council for History Education, Inc.

“Readers who enjoy this military history will welcome this overview ... an attractive and interesting view of behind-the-scenes history.”—Booklist

“A plethora of sidebars, maps … photographs, and … paintings enhances these fascinating accounts.”—Book Links, 11/07

“... a provoking and stimulating work ... The suspense, drama, scheming and plotting as presented in Ultra Hush Hush is absolutely striking ... This book should be a must- have for school and home libraries.”—Resource Links

“... engaging as much for its sidebar material ... as it is for the tales of espionage themselves ... A fascinating piece of history.”—Suite101.com

Other titles by Stephen Shapiro

Other titles by Tina Forrester