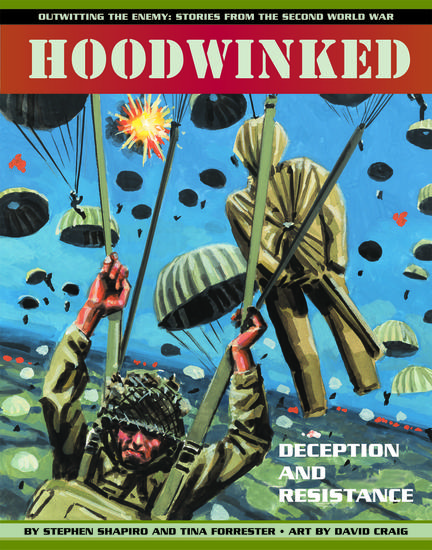 Hoodwinked plunges readers into the secret strategies and underground battles that helped turn the tide of war. Both sides used propaganda, misdirection, and espionage to gain the upper hand, including phantom armies, fake battle plans, and amazing acts of sabotage by resistance groups.

Stephen Shapiro holds a PhD and is the author of The Siege, Ultra Hush-hush!, Hoodwinked, and Battle Stations. He lives in Toronto.

“This clever book is both unique and exceptional as it focuses on specific stories of deception ... The narration of each story will engage readers like a clever mystery, and sidebar information provides factual tidbits ...”—Booklist

“... will undoubtedly be popular with readers who already have some knowledge and a strong interest in the history of the Second World War. It is well written, tracing a history of war that is often more celebratory ... offers escapist wartime adventure ...”—Resource Links

“The accounts of events sometimes read like short mysteries. A combination of full-color paintings, maps, diagrams, and black-and-white World War II-era photos illustrate the text. Sidebars present additional facts, anecdotes, and brief biographical entries. An interesting description of a topic that gets lost in most accounts of military force.”—School Library Journal

“In presentation, this book has ‘reluctant reader friendly’ written all over it ... it draws kids into the suspense of trickery and its uncertain outcome.”—Toronto Star

“...offers a wealth of engrossing, well-presented material ... The Shapiro/Forrester team was responsible for Ultra Hush-Hush, a companion piece for this one. They are very good at this sort of thing.”—The Globe and Mail

Other titles by Stephen Shapiro

Other titles by Tina Forrester