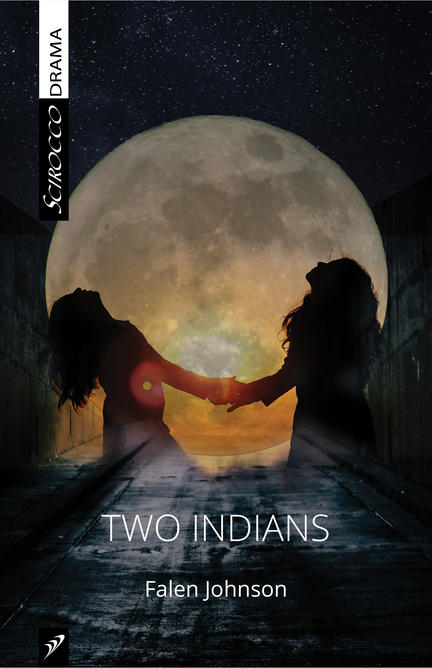 Win lives on the rez and Roe lives in the city, where she fled after a terrible family tragedy. After years apart, the two cousins reunite in a Toronto alley to recreate a ceremony from their childhood, but can they remember how? Has the world changed too much? Have they? When the words "missing and murdered," "truth and reconciliation," "occupation and resistance" are everywhere, how do two Mohawk women stand their ground? Falen Johnson"s powerful Two Indians is a darkly comedic look at the landscape of being Indigenous.

Falen Johnson is Mohawk and Tuscarora from Six Nations. She is an actor, playwright and emerging dramaturg. She is a graduate of George Brown Theatre School. Selected theatre credits include: The Only Good Indian with Turtle Gals Performance Ensemble, The Triple Truth, Savage, Strong Medicine, Death of a Chief, A Very Polite Genocide, and Tombs of the Vanishing Indian all with Native Earth Performing Arts. She has also been seen in The Ecstasy of Rita Joe, a co-production between Western Canada Theatre and the National Arts Centre. Recently Falen was seen in The River with Nakai Theatre as well as Tout Comme Elle, a co-production between Necessary Angel and Luminato, and in Where the Blood Mixes with Saskatchewan Native Theatre.

It's hot. It smells like an alley. We hear music. It begins it fades away and the sound of streetcars, the occasional sound of people having a good time on an early summer evening. Heading to dinner maybe a show. The street sounds run for the duration of the show. Increasing and decreasing in various sections.

The music and sound swell as we see ROE (Rose) and WIN (Winnie) walk into the alley.

The alley walls are covered in graffiti and tags. Milk crates sit in a stack near. There are mysterious alley puddles and scraps of garbage everywhere.

We hear in voice only; we are not sure if it is WIN or ROE, or both, or someone else altogether.

"Come on cousin. Little further. You're almost there. It's just down the road."

I'm trying to convince this guy to buy a pin. On top of all the other shit this guy is buying, leather jackets, sweat shirts, god-awful t-shirts, I'm trying to convince him to buy a goddamn pin. It's so effing ugly too. It's like a, like pilgrim, like a sexy pilgrim. Her tits are popping out and she's blonde, of course, and she's a sexy pilgrim. She's wearing this like sexy pilgrim outfit. Little black shorts, tall high heel boots, a collar that isn't even connected to a shirt it's just there to be like sexy. And her hat, her pilgrim hat slightly askew, sexily askew. And she's leaning on this giant guitar. In perfect fuck me pose.

Then all of a sudden it's like I come back into my body, like I land in my skin and I realize how fucking ludicrous this is. I'm an Indian selling pilgrim pins. Sexy pilgrim pins. Sexy rock 'n' roll-themed thanksgiving pilgrim pins. I know I shouldn't say it, even before I say it, but I just can't stop myself it's out of my mouth, I look right into this guys eyes and I say, "dressed like that no wonder they almost died when they got here."

The guy just looks at me blank. Totally not getting it. And I start giggling and the guy looks at me like what's-so-fucking-funny? And then I start laughing even harder and then I can't stop. And this guy is confused and then offended and then pissed cause I just won't stop. Can't stop. And then my manager walks in. I'm on the ground basically pissing myself, tears streaming down my face and I just laugh harder and harder because what else was there to do? I knew I was screwed fucked. Might as well laugh.

She laughs, WIN joins in.

"The volatile and unpredictable dynamic between Win and Roe shifts uneasily from familiar family nostalgia and hilarious-yet-revealing anecdotes to emotional accusations and intense confrontations that hinge on the reservation/city binary, and associated assumptions about First Nations identities." (NOW Magazine)

"As a whole production, the show's such a rewarding entertainment that you'll hardly notice the politics sneaking up behind you. Whatever your background, so long as you come into the room with an open mind, you'll leave savvier, with a number of sticky points and difficult questions that'll rattle around in your head for days afterwards...This is a fun show with heart, energy, and a vital message..." (Mooney on Theatre)

Other titles by Falen Johnson