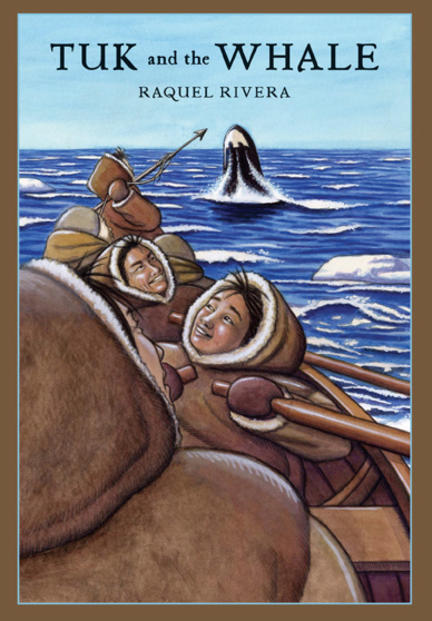 This story is set on the eastern coast of Baffin Island in the early decades of the 1600s. Told from the point of view of a young Inuit boy, Tuk, it imagines what might have happened if the people of Tuk's Baffin Island winter camp had encountered European whalers, blown far north from their usual whaling route. Both the Inuit hunters and the whalers prize the bowhead whale, but for very different reasons. Together, they set out on a hunt, though they are all on new and uncertain ground.

Scrupulously researched, this beautifully told story will inspire extremely topical discussion about communication between two groups of people with entirely different world views; and about a productive partnership that also foreshadows serious problems to come.

Raquel Rivera was born and raised in Toronto, Ontario. After graduating York University with a B.F.A. in Visual Arts in 1987, Raquel Rivera moved to Barcelona, Spain, for two years. There she found work as a teacher of English, pursued her drawing and learned Spanish.

Some years later, she left Toronto again to live in Singapore. While working as a project manager and copywriter for a graphic design firm there, Raquel was able to produce a series of artist books. Her "Small Books" now tour North America in Projet mobilivre/Bookmobile (www.mobilivre.org) and are included in the collection at Montreal's Bibliograph/e Zine Library (www.bibliograph.ca).

In 1996 Raquel and her future husband Kim moved one country north, to Kuala Lumpur, Malaysia. They started a website design practice and founded Site Dish! (www.sitedish.com) to house interactive projects experimenting with art, writing and interface design for the web. At the same time, Raquel was able to pursue her writing and drawing online in web art collaborations with Montreal-based artist, Jeannette Lambert—work which was featured in online journals and festivals around that time.

In 1999 Raquel began raising a family and focusing exclusively on her own writing and art. She has since published poems, exhibited her drawings and written three children's books: Arctic Adventures, Tales from the Lives of Inuit Artists, Orphan Ahwak and Tuk and the Whale.

Raquel maintains a book review website, In My Hysterical Opinion. She now lives in Montreal with her husband and two children.

Mary Jane Gerber has illustrated several books for children, including A Gift for Ampato by Susan Vande Griek and House Calls by Ainslie Manson. She lives in Orangeville, Ontario.

The style is low-key and pared down but smooth, and the picture of seventeenth-century Inuit life is credibly drawn and narratively appropriate, avoiding the determined documentary flavor of some historical work.

Tuk and the Whale is a story that provides a glimpse into what life was like for the Inuit people very early on in the whaling industry...[Raquel Rivera does] an exceptional job of seamlessly waeving details of her research...Young readers will enjoy reading this book, and it would make an excellent introduction to a unit on the whaling industry and the Inuit culture.

Black-and-white illustrations show the action at a distance and help readers visualize the vast and flat terrain.

Tuk and the Whale

This adventure story is set on Baffin Island during the early 1600s. Tuk, a young Inuit boy, is the first to see the European whaling ship, predicted by his grandfather’s dream. When he tells the others, the children voice the conflicting feelings felt by the villagers. Some want to fight and chase them away, others are excited and drawn to the unknown, deciding to trust in the interest of trade. When the “qallanaat” make it clear they want the villagers to help them to hunt whales, the decision must be made whether to go along with them despite enormous risks. This well-researched book contains many details about whaling practices, the Inuits’ day-to-day activities and lifestyles. The use of many Inuit words provides authenticity. A glossary is included.

Tuk and the Whale is Rivera’s third book for children.

Tuk and the Whale

This story, set on Baffin Island’s eastern coast, unfolds in the early decades of the 1600s. Told from the point of view of a young Inuit boy, Tuk, this story imagines what might have happened if the Inuit of Baffin Island had met European whalers, blown far from their usual whaling route.

Other titles by Raquel Rivera

Other titles by Mary Jane Gerber

The Ways I Will Love You Read-Along