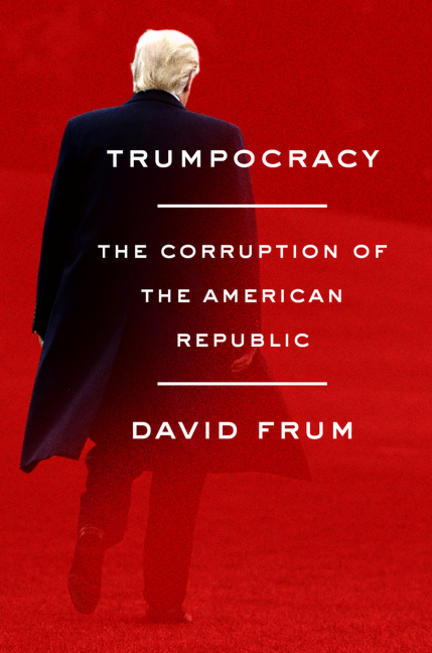 Bestselling author, former White House speechwriter, and Atlantic columnist and media commentator David Frum explains why President Trump has undermined our most important institutions in ways even the most critical media has missed, in this thoughtful and hard-hitting book that is a warning for democracy and America’s future.

"From Russia to South Africa, from Turkey to the Philippines, from Venezuela to Hungary, authoritarian leaders have smashed restraints on their power. Media freedom and judicial independence have eroded. The right to vote remains, but the right to have one’s vote counted fairly may not. Until the US presidential election of 2016, the global decline of democracy seemed a concern for other peoples in other lands. . . . That complacent optimism has been upended by the political rise of Donald Trump. The crisis is upon Americans, here and now."

Quietly, steadily, Trump and his administration are damaging the tenets and accepted practices of American democracy, perhaps irrevocably. As he and his family enrich themselves, the presidency itself falls into the hands of the generals and financiers who surround him.

While much of the country has been focused on Russia, David Frum has been collecting the lies, obfuscations, and flagrant disregard for the traditional limits placed on the office of the presidency. In Trumpocracy, he documents how Trump and his administration are steadily damaging the tenets and accepted practices of American democracy. During his own White House tenure as George W. Bush’s speechwriter, Frum witnessed the ways the presidency is limited not by law but by tradition, propriety, and public outcry, all now weakened. Whether the Trump presidency lasts two, four, or eight more years, he has changed the nature of the office for the worse, and likely for decades.

In this powerful and eye-opening book, Frum makes clear that the hard work of recovery starts at home. Trumpocracy outlines how Trump could push America toward illiberalism, what the consequences could be for our nation and our everyday lives, and what we can do to prevent it.

DAVID FRUM is one of North America’s leading public intellectuals, staunch critic of modern conservatism and its co-mingling with populist politics, and a former speechwriter for the George W. Bush White House. Frum is currently a senior editor of the Atlantic and a frequent media commentator in Canada and the U.S. He is the author of nine books, most recently the New York Times bestseller Trumpocracy: The Corruption of the American Republic.

“With precision and even eloquence, Frum details how the Trump campaign and administration has damaged American institutions and the American psyche. For those who oppose Trumpism, this is a clarion call.”

“No conservative has been a more astute, unsparing or courageous critic of Trumpism than David Frum. Trumpocracy is a powerful summation of the case against Trump based on a close reading of his first year in office. Even those who have followed the Trump administration closely will find much to surprise and enrage them in Frum’s devastating analysis.A must-read to understand what we went through in 2017--and where we are going next.”

“In the midst of all the Trump-fueled hysteria and Trump-related gossip, it’s a godsend to have David Frum lay out the case against Trump and his kleptocracy in this measured, insightful, and scrupulously researched book. He builds his argument with the precision of a prosecuting attorney, and writes about it in the riveting style of a thriller writer.  This is an essential guide to the malevolent tragedy that is Trumpocracy.”

“Evenhanded, ideologically consistent, and guaranteed to generate a slew of angry tweets should a copy land at the White House.”

“Magnificent.…The wisdom of the final chapter in particular absolutely floored me.”

“An outstanding chronicle of the unending corruption, deceit, and chaos that acts as rocket fuel for the administration, and ego, of President Donald J. Trump. This is a brilliant book of a frightening American present, it is also an honest discussion of the gifts a Trump Presidency has unwittingly revealed.”

<strong>Malcolm Nance, author of <em>The Plot to Hack America: How Putin’s Cyberspies and Wikileaks Tried to Steal the 2016 Election</em></strong>

“All but the most determined Trump enthusiasts should feel pin pricks of recognition and...a queasy discomfort.”

“Frum charts the erosion of democratic principles over the course of Donald Trump’s campaign and first year in office, enumerating both the president’s own improprieties and the misdeeds of his various advisers and hangers-on. Frum’s incisive prose and optimism set this apart.”

“A far more rewarding book than Fire and Fury.”

“Fascism did not rise in the 30’s because it was strong but rather because Democracy was weak. David Frum has written an essential book for a time when the pillars and norms of American Democracy are under threat from the leaders pledged to preserve it.”

Other titles by David Frum

The Rise of Populism

The Corruption of the American Republic