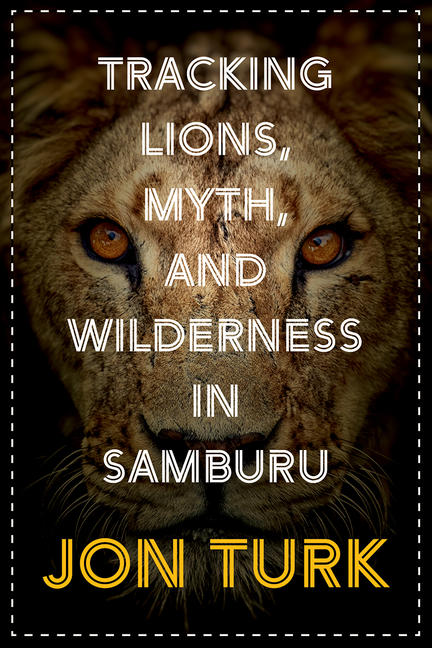 A provocative look at the vital connection between human beings, the natural world and meaningful knowledge.

While tracking a lion with a Samburu headman and then, later, eluding human assailants who may be tracking him, Jon Turk experiences people at their best and worst. As the tracker and the tracked, Jon reveals how the stories we tell each other, and the stories spinning in our heads, can be moulded into innovation, love and co-operation — or harnessed to launch armies. Seeking escape from the confusion we create for ourselves and our neighbours with our think-too-much-know-it-all brains, Jon finds liberation within a natural world that spins no fiction.

Set in a high-adventure narrative on the unforgiving savannah, Tracking Lions, Myth, and Wilderness in Samburu explores the aboriginal wisdoms that endowed our Stone Age ancestors with the power to survive – and how, since then, myth, art, music, dance, and ceremony have often been hijacked and distorted within our urban, scientific, oil-soaked world.

Jon Turk grew up on the shores of a wooded lake in Connecticut, attended Phillips Academy in Andover, Massachusetts, and then Brown University. He earned a Ph.D. in organic chemistry in 1971 and was nominated by National Geographic as one of the Top Ten Adventurers of the Year in 2012. Between these bookends, he co-authored the first college-level environmental science textbook in North America, followed by more than 30 additional texts in environmental, physical, and Earth sciences. At the same time, Jon kayaked around Cape Horn and across the North Pacific from Japan to Alaska, mountain biked across the northern Gobi in Mongolia, made first climbing ascents of big walls on Baffin Island and first ski descents in the Tien Shan Mountains in Kyrgyzia, and in 2011 circumnavigated Ellesmere Island. He has published numerous magazine articles and four adventure books: Cold Oceans, In the Wake of the Jomon, The Raven’s Gift, and Crocodiles and Ice. During extended travel in northeast Siberia, his worldview was altered by Moolynaut, a Siberian shaman. Jon splits his time between Darby, Montana (near the southwestern boundary of Montana and Idaho, along the Continental Divide), and Fernie, British Columbia. For more information, see jonturk.net.

Praise for Tracking Lions and Myth in Samburu:

“Adventurer and author Jon Turk’s worldview has been sculpted over the past seven decades by science and shaped by mythology. In this, his proclaimed “final book,” Jon distills hard-earned lessons learned from his larger-than-life experience into the following: the pursuit of happiness is the root of all unhappiness, and the pursuit of happiness is killing the planet. So, where do we go from here?”
—Pat Morrow, mountaineer, filmmaker, photographer, environmental advocate, coauthor of Searching for Tao Canyon

“While tracking lions in Samburu, explorer and lifelong environmentalist Jon Turk is not afraid to ask the Big Questions: if humans have such impressive problem-solving brains, why have we ended up trashing the planet? When did our behaviour start to evolve away from the animals and the natural world, and what has been the cost of that? Whether he is describing the midnight growl of a leopard outside his tent or “interviewing the Earth,” Jon Turk is a gifted storyteller, a wise elder and a fun companion.”
—Marni Jackson, author and editor with the Mountain and Wilderness Writing Program at The Banff Centre

“Tracking Lions, Myth, and Wilderness in Samburu is a call to expand our natural wisdom to transform the way we experience life, as individuals and as communities. What I love about Jon’s message is its simplicity. The fact that stories have both united and separated us for ages is very clear, but what we don’t see is that stories are the realm of our ‘think-too-much-know-it-all brains’ as Jon likes to say. However, he suggests there is another obvious way of experiencing life that recognizes that there is no separation between you, me, and the natural world. This is a must-read book for anyone who is ready to explore the magic of true living!”
—Valeria Teles, podcaster, blogger, healing coach, author of Inner Peace and Clarity, Fit for Joy and What Is Love?

“Jon Turk is one of our most articulate and courageous writer-adventurers. On this journey to the Samburu people and the lion-savannahs of Africa, he guides us on an intellectual probing of our deep human past in an attempt to understand our planet’s future. Bravely curious, he explores the proto-consciousness that grows from living in the moment, on the edge of survival, like our ancestral hunting-and-gathering forebears. Reading Tracking Lions, you’ll think about human interaction with the natural world in ways you haven’t before.”
—Peter Stark, author of At the Mercy of the River: An Exploration of the Last African Wilderness, Young Washington: How Wilderness and War Forged America’s Founding Father, and the New York Times bestseller Astoria

“With his trenchant powers of observation, Jon Turk has steered kayaks, skis and climbing rack up and down those far-flung destinations most of us will never visit, from Tierra del Fuego to Kamchatka to the Canadian Arctic, and now, in his latest work, eastern Africa. His books have always transcended the standard adventure narrative – in inimitable, no-bullshit prose – by taking his readers into the heart of both wilderness and culture. More than just a compelling insight into place and a little-known and olden-day culture, Tracking Lions makes the linkage to what we have lost in our own, troubled, modern society. Jon Turk is as precious as a Samburu warrior.”
—Jonathan Waterman, author of Atlas of the National Parks, In the Shadow of Denali, Chasing Denali, and Arctic Crossing

Other titles by Jon Turk

A Journey into Deep Wild