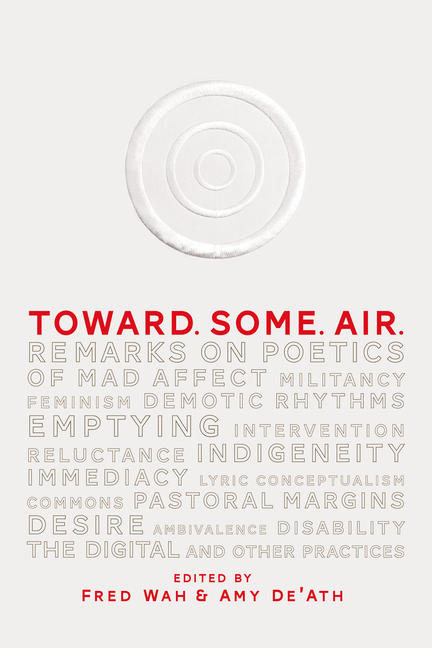 Toward. Some. Air. is an unprecedented collection of contemporary poetics from Canada, the United States, and the United Kingdom. Here, poet and scholar Amy De'Ath and former Parliamentary Poet Laureate Fred Wah collect a wide range of conversations, statements, essays, profiles, and poems and place these often radical and interdisciplinary approaches in proximal relation to each other. The result is an open invitation to consider the contours and meaning of Anglophone poetic practice, as a mode of interpreting the world, as a potential for transforming subjectivity, or something else entirely. With over forty contributors, Toward. Some. Air. is an invaluable resource for readers, students, teachers and writers.

Fred Wah is from the Kootenay region of southeast British Columbia. He is best known for his biofiction, Diamond Grill (1966). Recent collections of poetry are Sentenced to Light, is a door, and The False Laws of Narrative. He was Canada's fifth Parliamentary Poet Laureate and lives in Vancouver.Amy De'Ath is a PhD candidate at Simon Fraser University, where she researches Marxist Feminist poetics. She was previously based in London, UK and in 2011 was Poet in Residence at the University of Surrey. Her poetry books include Erec & Enide, Caribou, and Lower Parallel. She now lives in Vancouver, Coast Salish Territories.

Born in Swift Current, Saskatchewan in 1939, celebrated Canadian poet Fred Wah was raised in the interior of British Columbia. He is the author of over 20 published works of poetry and prose-poetry, including the award-winning creative non-fiction Diamond Grill, the tenth anniversary edition of which was released in the fall of 2006. Other notable titles by Wah include his book of poetry Waiting For Saskatchewan (Turnstone Press), winner of a Governor General’s Award in 1985, and Faking It: Poetics and Hybridity, winner of the Gabrielle Roy Prize for Writing in Canadian literature. In 2008, he published a collection of poetic image/text projects titled Sentenced to Light (Talonbooks), and in 2010, he won the Dorothy Livesay BC Book Prize for poetry for is a door (Talonbooks).Fred Wah was one of the founding editors of the poetry journal TISH. After graduate work in literature and linguistics at the University of New Mexico in Albuquerque and the State University of New York in Buffalo, where he worked with Robert Creeley and Charles Olson, he returned to Canada. He has been involved in teaching internationally in poetry and poetics since the early 1960s. In 2011, Wah became Canada's Parliamentary Poet Laureate, the fifth poet to do so. In 2013, he was made an Officer in the Order of Canada. Fred Wah currently works and lives in Vancouver.

Other titles by Fred Wah

Music at the Heart of Thinking

False Laws of Narrative, The

Loki Is Buried at Smoky Creek