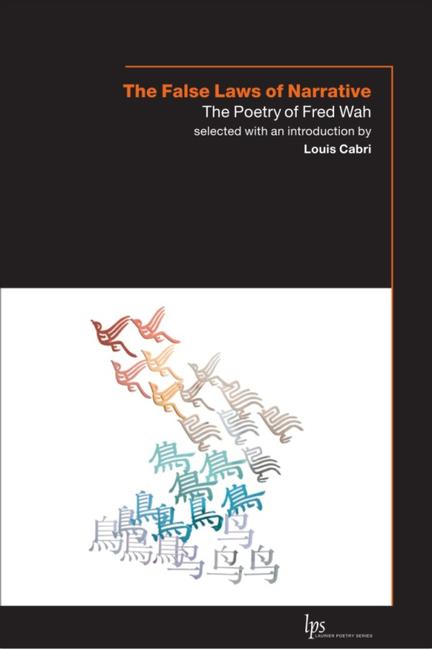 The False Laws of Narrative is a selection of Fred Wah’s poems covering the poets entire poetic trajectory to date. A founding editor of Tish magazine, Wah was influenced by leading progressive and innovative poets of the 1960s and was at the forefront of the exploration of racial hybridity, multiculturalism, and transnational family roots in poetry. The selection emphasizes his innovative poetic range.

Wah is renowned as one of Canada’s finest and most complex lyric poets and has been lauded for the musicality of his verse. Louis Cabri’s introduction offers a paradigm for thinking about how sound is actually structured in Wah’s improvisatory poetry and offers fresh insights into Wah’s context and writing. In an afterword by the poet himself, Wah presents a dialogue between editor and poet on the key themes of the selected poems and reveals his abiding concerns as poet and thinker.

Born in Swift Current, Saskatchewan in 1939, celebrated Canadian poet Fred Wah was raised in the interior of British Columbia. He is the author of over 20 published works of poetry and prose-poetry, including the award-winning creative non-fiction Diamond Grill, the tenth anniversary edition of which was released in the fall of 2006. Other notable titles by Wah include his book of poetry Waiting For Saskatchewan (Turnstone Press), winner of a Governor General’s Award in 1985, and Faking It: Poetics and Hybridity, winner of the Gabrielle Roy Prize for Writing in Canadian literature. In 2008, he published a collection of poetic image/text projects titled Sentenced to Light (Talonbooks), and in 2010, he won the Dorothy Livesay BC Book Prize for poetry for is a door (Talonbooks).Fred Wah was one of the founding editors of the poetry journal TISH. After graduate work in literature and linguistics at the University of New Mexico in Albuquerque and the State University of New York in Buffalo, where he worked with Robert Creeley and Charles Olson, he returned to Canada. He has been involved in teaching internationally in poetry and poetics since the early 1960s. In 2011, Wah became Canada's Parliamentary Poet Laureate, the fifth poet to do so. In 2013, he was made an Officer in the Order of Canada. Fred Wah currently works and lives in Vancouver.

Louis Cabri is author of The Mood Embosser, which was awarded the 2002 book of the year by Small Press Traffic (San Francisco), and â??that canâ??t (forthcoming). He edited, from Philadelphia, the poetsâ?? newsletter PhillyTalks and co-edited, from Ottawa/Calgary, hole magazine and books. He teaches literary theory, Canadian and US modern and contemporary poetry, and creative writing at the University of Windsor.

Fred Wah has been involved with a number of literary magazines over the years, such as Open Letter and West Coast Line. Recent books are the biofiction Diamond Grill (1996), Faking It: Poetics and Hybridity (2000), a collection of essays, and Sentenced to Light (2008), a collection of poetic image/text projects. He splits his time between the Kootenays in southeastern B.C. and Vancouver.

Other titles by Fred Wah

Music at the Heart of Thinking

Loki Is Buried at Smoky Creek

Other titles by Louis Cabri