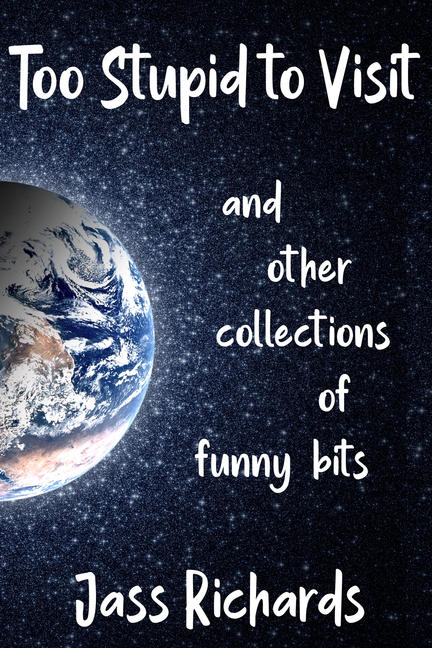 A themed collection of bits from Jass Richards' non-existent stand-up career
__________
"Your material is fabulous! It reminds me so much of George Carlin. …" Gemini Rising
“Ya made me snort root beer out my nose!” Moriah Jovan, The Proviso
“Jass is a comedy genius. … reminiscent of Monty Python … ” May Arend, Brazilian Bookworm
"… wretchedly funny." C. Mike Rice, Realworldatheism

Jass Richards (jassrichards.com) has a Master’s degree in Philosophy and for a (very) brief time was a stand-up comic (now she’s more of a sprawled-on-the-couch comic). Despite these attributes, she has received four Ontario Arts Council grants.

In addition to her Rev and Dylan series (The Road Trip Dialogues, The Blasphemy Tour, License to Do That, and The ReGender App), which has reportedly made at least one person snort root beer out her nose, she has written This Will Not Look Good on My Resume (shortlisted for the Rubery Book Award), followed by its sequel Dogs Just Wanna Have Fun ('nuff said). She has also written the perfect cottage-warming gift, TurboJetslams: Proof #29 of the Non-Existence of God (which made it to Goodreads' Fiction Books That Opened Your Eyes To A Social Or Political Issue list, along with License to Do That) and a (way)-off-the-beaten-path first contact story, A Philosopher, A Psychologist, and an Extraterrestrial Walk into a Chocolate Bar.

Excerpts from her several books have appeared in The Cynic Online Magazine, in Contemporary Monologues for Young Women (vol.3) and 222 More Comedy Monologues, and on Erma Bombeck’s humor website. Her one-woman play Substitute Teacher from Hell received its premiere performance by Ghost Monkey Productions in Winnipeg.

Her worst-ever stand-up moment occurred in Atlanta at a for-blacks-only club (apparently). Her best-ever stand-up moment occurred in Toronto when she made the black guy fall off his stool because he was laughing so hard at her Donovan Bailey joke (The guy set a world record for running the 100M in 9.84 seconds, yeah? Big wup. My dog can do better than that. 'Course, she's black too).

Excerpt: Too Stupid to Visit (by (author) Jass Richards)

Are there intelligent life forms out there in the universe?
Well yeah. No one’s visited us yet.

If the history of the Earth were a year, life would not appear until March, multi-cellular organisms not until November. Dinosaurs would show up on December 13, and mammals on December 15. On December 31, we’d show up. By late evening, we’d have well-developed brains.

And then it’d take us 60 seconds to thoroughly trash the place.

We put tons of carcinogens into our food, water, and air.

And then spend millions of dollars looking for the cure for cancer.

Oh where oh where could it be.

The thing about cause and effect is that unless it’s immediate and visual, we just don’t get it. We just don’t connect.

We sentenced Socrates to death and let a number of serial killers live.

We’re still trying to get our whites whiter.

Heard this guy say the other day that women can’t do jobs that involve heavy machinery.

You don’t have to lift it, you just have to operate it!

Most men generally don’t think much of most women.

And yet, they continue to prohibit them from joining the military, where they could easily get killed.

Our foreign aid policy goes something like this: the adults are too weak to do much of anything and the kids are so malnutritioned they’re mentally retarded, but hey, let’s give them just enough food (and no contraception) so they can keep on reproducing, a million new kids every three weeks.

A contraceptive pill designed for men was rejected because of the negative side-effect of reducing their sex drive.

Given the reason for taking the pill, wouldn’t that have been a positive side-effect?

We live in a world in which countries routinely sell weapons to their enemies: “Hey you. Yeah you. I’m gonna blow your face off. Yeah. What? You got nothin’ to fight with? Hey Vinny, sell the man one of your bazookas. No, not that one, the other one. Yeah. Well he can pay us later. Put him on our don’t-pay-till-May plan. Okay? You all set now? Okay then. Now I’m gonna blow your face off.”

Otherwise, it would be, what, wrong?

McMaster University initiated a research project to study the health effects of war.

Perhaps some genius hypothesized that it causes death.

In a recent experiment involving monkeys, 13% pulled a chain electroshocking an unrelated monkey whose agony was in plain view. In a similar experiment conducted with humans, 65% administered the shock, to the point of fatality.

Much to do was subsequently made about the ethics — of the experimenters.

Many of us are too unimaginative — or too lazy — or both — to make our lives worthwhile. So we have kids. That’s our contribution to society. Genetic replications of our deficiency.

This inability to find fulfillment in the here and now is shared by those who set their sights on some heaven. No surprise, they’re the ones with the most kids.

A worker, no doubt somebody’s kid, accidentally dropped a socket wrench down a silo. It hit a missile causing an explosion that launched a nine megaton hydrogen bomb into a field several hundred yards away. Oops.

Because of naval mishaps, there are now nine nuclear reactors and fifty nuclear warheads on the ocean floor. Mishaps.

A nuclear bomb fell out of a U.S. bomber and landed in a Carolina swamp. It has not yet been found. Perhaps the localized proliferation of two-headed alligators should be considered a clue.

The U.S. dropped four plutonium bombs on Spain by mistake. I have to ask: four at once or on four separate occasions?

The Annual Turing Test Competition is an event in which a panel of experts asks questions from a remote location of a bunch of computers and a bunch of people. If they can’t tell that a computer is a computer, it passes the Turing Test: it is deemed able to think.

In a recent competition, some of the people failed the test.

"Jass Richards  … is back with another exceptional book that entertains and informs as she mixes feminism, critical thinking, and current social issues …."  James M. Fisher, The Miramichi Reader, about A Philosopher, a Psychologist, and an Extraterrestrial Walk into a Chocolate Bar

“Extraordinarily well-written with wit, wisdom, and laugh-out-loud ironic recognition …  TurboJetslams: Proof #29 of the Non-Existence of God is a highly entertaining and riveting read …." Midwest Book Review

“I’m very much intrigued by the issues raised in [License to Do That].  I also enjoy the author’s voice, which is unapologetically combative but also funny and engaging.”  A. S.

“If I were Siskel and Ebert I would give [The Blasphemy Tour] Two Thumbs Way Up. Yes, it is blasphemy toward organized religion, but it gives you tons of Bible verses to back up itspremises. And besides, it’s pure entertainment. There’s a prequel which I recommend you read first: The Road Trip Dialogues.  I only hope there will be a third book.”  L. K. Killian, Amazon, 5/5 stars

“I am impressed by [your] philosophical perspicuity … .”  L. S., about The Road Trip Dialogues

“Jass Richards is brilliant with the snappy comebacks and the unending fountain of information …. The quick wit, the sharp tongue, the acid words … that literally ooze from her pores….   I laughed so hard I cried in some places.” M. S., My Chaotic Ramblings, about This Will Not Look Good on My Resume

Other titles by Jass Richards

TurboJetslams:Proof #29 of the Non-Existence of God

TurboJetslams: Proof #29 of the Non-Existence of God

License to Do That

This Will Not Look Good on My Resume