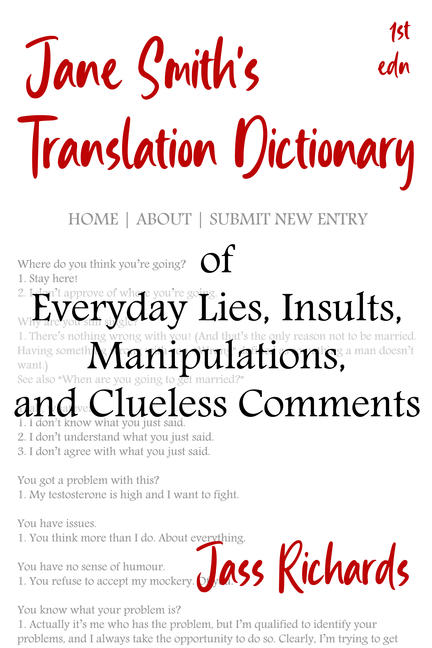 Jass Richards (jassrichards.com) has a Master’s degree in Philosophy and for a (very) brief time was a stand-up comic (now she’s more of a sprawled-on-the-couch comic). Despite these attributes, she has received four Ontario Arts Council grants.

In addition to her Rev and Dylan series (The Road Trip Dialogues, The Blasphemy Tour, License to Do That, and The ReGender App), which has reportedly made at least one person snort root beer out her nose, she has written This Will Not Look Good on My Resume (shortlisted for the Rubery Book Award), followed by its sequel Dogs Just Wanna Have Fun ('nuff said). She has also written the perfect cottage-warming gift, TurboJetslams: Proof #29 of the Non-Existence of God (watch for the sequel, CottageEscape.com: Satan Takes Over), which, along with License to Do That, made it to Goodreads' Fiction Books That Opened Your Eyes To A Social Or Political Issue list, and a (way)-off-the-beaten-path first contact story, A Philosopher, A Psychologist, and an Extraterrestrial Walk into a Chocolate Bar, to which Jane Smith's Translation Dictionary is a 'companion' book. Lastly, she has written Too Stupid to Visit¸ a collection of funny bits from her stand-up non-career.

Excerpts from her several books have appeared in The Cynic Online Magazine, in Contemporary Monologues for Young Women (vol.3) and 222 More Comedy Monologues, and on Erma Bombeck’s humor website. Her one-woman play Substitute Teacher from Hell received its premiere performance by Ghost Monkey Productions in Winnipeg.

Her worst-ever stand-up moment occurred in Atlanta at a for-blacks-only club (apparently). Her best-ever stand-up moment occurred in Toronto when she made the black guy fall off his stool because he was laughing so hard at her Donovan Bailey joke (the guy set a world record for running the 100M in 9.84 seconds, yeah? Big wup. My dog can do better than that. 'Course, she's black too).

All right, you’ve had your fun.

b. because it’s annoying me.

c. because it’s not in my best interests. (And everything everyone does should be for ME.) (Calling it “fun” trivializes what you’re doing. Grown-ups don’t have fun. They work.) (Calling it “fun” infantilizes you. Only children play, have fun.) (Not that I’m conscious of that. It’s just something that I, as a man, learned to do. Trivialize and infantilize. The other. Especially women.)

Are you looking for a fight?

1. I’m looking for a fight. (But I want to put the blame for starting it on you.)

Because I said so.

1. I don’t know why. (I’m not that smart. I typically have no good reason for the things I say and do.)

2. Doesn’t matter why. I just want you to obey me.

Call if you need anything.

1. Your anger/distress is upsetting me.

2. As a woman, you are prone to hysterics. (And as a man, it is my job to control you.) (Because god knows, I can’t control myself.)

Cut me some slack!

Do me a favor.

2. As a man, I’m entitled. To your favours. (Otherwise I’d say “Could you please do me a favor?”) (Calling it a “favor” pressures you to do it: it suggests that it’s just a little bitty thing, so you’ll feel mean and stingy if you don’t do it. Even though, of course, I could be asking you to get me a job or perjure yourself. In fact, I’m probably asking you for exactly not just a little bitty thing. If I’d said “Do this momentous thing that will cost you your life as you know it – for me,” you probably wouldn’t do it. Not that I’m aware of any of this.)

1. Don’t be unconventional. (People who don’t conform to the norms make those of us who do nervous. We start thinking that maybe there’s something we’re not considering. Like, maybe, independent thought. Or ethics. Or joy.)

Don’t be so judgmental.

1. Don’t judge me. Just let me get away with anything, everything. Above all, don’t make me feel like I’ve done something wrong.

2. It makes me look even more lazy and stupid.

Don’t be so sensitive.

1. I want to believe that my actions have no effect whatsoever on anyone.

2. Don’t reveal by comparison what a dull-headed emotionally-challenged thug I am.

See “Don’t do anything stupid.”

Don’t be such a bleeding heart.

1. Empathy gets in my way. (It makes me realize that what I’m doing is morally unjustifiable.) (Which is why I discourage it whenever possible.)

Don’t do anything stupid.

1. Don’t react in a way reserved for men. (Anger is intimidating. Women aren’t allowed to be intimidating. It completely undermines the house of cards whereby men are on the top.)

1. Don’t make me have to do something. (The whole “Manly men must come to the aid of women in distress” is something I haven’t bothered to question.)

1. Don’t think about this at all. (Because if you do, you’ll see how utterly lame it is.)

2. Don’t think more than me. (It shatters my illusions.)

1. I have no insight whatsoever into my personality, my motives, or my desires, and you shouldn’t either.

2. Don’t try to understand why I do what I do. Because if you do, you’ll discover that

b. I’m really messed up.

c. both of the above.

1. I don’t want to hear that! (And an admonishment, a moral reprimand, nay, a command, has more weight than a simple statement of what I do or do not want.) (And it’s more likely to make you the bad guy, whether or not you heed the reprimand. And me, by default, the good guy.)

1. I didn’t intend it personally.

a. Because I don’t recognize you as a person. You’re just a means to my ends.

b. I’m that insensitive.

c. Because I’m incapable of being personal. (Because I deny, or haven’t developed, any of the stuff that makes me a person.) (Like a personality.) (And a morality.) (Reflective consciousness.)

"Jass Richards … is back with another exceptional book that entertains and informs as she mixes feminism, critical thinking, and current social issues … Aside from the hilarious wedding intervention, one of my favourite parts is when …." James M. Fisher, The Miramichi Reader, about A Philosopher, a Psychologist, and an Extraterrestrial Walk into a Chocolate Bar

"Extraordinarily well-written with wit, wisdom, and laugh-out-loud ironic recognition … TurboJetslams: Proof #29 of the Non-Existence of God is a highly entertaining and riveting read …." Midwest Book Review

“I’m very much intrigued by the issues raised in [License to Do That]. I also enjoy the author’s voice, which is unapologetically combative but also funny and engaging.” A. S.

"[License to Do That has a] thought-provoking premise and a wonderful cast of characters." H. W.

"If I were Siskel and Ebert I would give [The Blasphemy Tour] Two Thumbs Way Up. Yes, it is blasphemy toward organized religion, but it gives you tons of Bible verses to back up its premises. And besides, it’s pure entertainment. There’s a prequel which I recommend you read first: The Road Trip Dialogues. I only hope there will be a third book." L. K. Killian, Amazon, 5/5 stars

"Just thought I’d let you know I’m on the Fish ‘n Chips scene [in The Road Trip Dialogues] and laughing my ass off." Ellie Burmeister

"I am impressed by [your] philosophical perspicuity … ." L. S., about The Road Trip Dialogues

"Jass Richards is brilliant with the snappy comebacks and the unending fountain of information …. The quick wit, the sharp tongue, the acid words … that literally ooze from her pores…. I laughed so hard I cried in some places." M. S., My Chaotic Ramblings, about This Will Not Look Good on My Resume

"This book is brilliant. … The premise is really intriguing … beta testers are sought for an app that can mask the gender of a person and change it to the opposite one by creating a hologram based on the person's initial appearance. … [T]he scene at the airport had me laughing out loud … [E]xtremely thought-provoking …." Katya, Goodreads

"Could an App change our views of hte world? The ReGender App by Jass Richards might answer that question. When I started reading this book, I had no idea how things are going to turn out. But must admit I was very impressed with it. First and foremost the characters are really cool … They are those type of people I’d like to hang out with. Intelligent, witty, and adventurous. I enjoyed their dialogue and insights. ... I loved the issues Jass Richards touched in this book. … It was interesting to see how things are being seen once you live in the shoes of the opposite sex and see the world through their eyes. ... This is a book I really recommend to any book club and to people who are interested in gender differences and gender discrimination." Mesca Elin, Psychochromatic Redemption

Other titles by Jass Richards

Too Stupid to Visit

TurboJetslams:Proof #29 of the Non-Existence of God

TurboJetslams: Proof #29 of the Non-Existence of God

License to Do That

This Will Not Look Good on My Resume