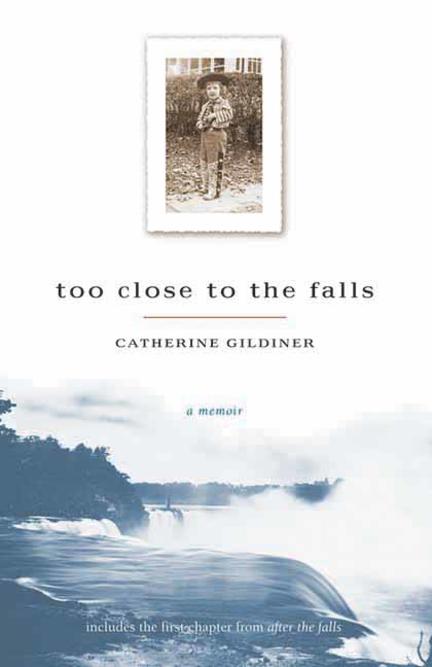 Heartbreaking and wicked: a memoir of stunning beauty and remarkable grace. Improbable friendships and brushes with death. A schoolgirl affecting the course of aboriginal politics. Elvis and cocktails and Catholicism and the secrets buried deep beneath a place that may be another, undiscovered Love Canal — Lewiston, New York. Too Close to the Falls is an exquisite, haunting return, through time and memory, to the heart of Catherine Gildiner’s childhood.

And what a childhood it was …

Catherine Gildiner has a Ph.D. in psychology and has been in private, clinical practice for seventeen years. She writes a psychological advice column for Chatelaine Magazine and has written numerous newspaper articles. She lives with her husband and her three children in Toronto, and is on a competitive rowing team. Too Close to the Falls is her first book.

Excerpt: Too Close to the Falls: A Memoir (by (author) Catherine Gildiner)

Over half a century ago I grew up in Lewiston, a small town in western New York, a few miles north of Niagara Falls on the Canadian border. As the Falls can be seen from the Canadian and American sides from different perspectives, so can Lewiston. It is a sleepy town, protected from the rest of the world geographically, nestled at the bottom of the steep shale Niagara Escarpment on one side and the Niagara River on the other. The river’s appearance, however, is deceptive. While it seems calm, rarely making waves, it has deadly whirlpools swirling on its surface which can suck anything into their vortices in seconds.

My father, a pharmacist, owned a drugstore in the nearby honeymoon capital of Niagara Falls. My mother, a math teacher by training rather than inclination, was an active participant in the historical society. Lewiston actually had a few historical claims to fame, which my mother eagerly hyped. The word cocktail was invented there, Charles Dickens stayed overnight at the Frontier House, the local inn, and Lafayette gave a speech from a balcony on the main street. Our home, which had thirteen trees in the yard that were planted when there were thirteen states, was used to billet soldiers in the War of 1812. It was called into action by history yet again for the Underground Railroad to smuggle slaves across the Niagara River to freedom in Canada.

My parents longed for a child for many years; however, when they were not blessed, they gracefully settled into an orderly life of community service. Then I unexpectedly arrived, the only child of suddenly bewildered older, conservative, devoutly Catholic parents.

I seem to have been “born eccentric” — a phrase my mother uttered frequently as a way of absolving herself of responsibility. By today’s standards I would have been labelled with attention deficit disorder, a hyperactive child born with some adrenal problem that made her more prone to rough-and-tumble play than was normal for a girl. Fortunately I was born fifty years ago and simply called “busy” and “bossy,” the possessor of an Irish temper.

I was at the hub of the town because I worked in my father’s drugstore from the age of four. This was not exploitive child labour but rather what the town pediatrician prescribed. When my mother explained to him that I had gone over the top of the playground swings making a 360-degree loop and had been knocked unconscious twice, had to be removed from a cherry tree the previous summer by the fire department, done Ed Sullivan imitations for money at Helms’s Dry Goods Store, all before I’d hit kindergarten, Dr. Laughton dutifully wrote down all this information, laid down his clipboard with certainty, and said that I had worms and needed Fletcher’s Castoria. His fallback position (in case when I was dewormed no hyperactive worms crept from any orifice) was for me to burn off my energy by working at manual labour in my father’s store. He explained that we all had metronomes inside our bodies and mine was simply ticking faster than most; I had to do more work than others to burn it off.

Being in the full-time workforce at four gave me a unique perspective on life, and I was exposed to situations I later realized were unusual for a child. For over ten years I never once had a meal at home, and that included Christmas. I worked and went to restaurants and delivered everything from band-aids to morphine in the Niagara Frontier. I had to tell people whether makeup looked good or bad, point out what cough medicines had sedatives, count and bottle pills. I also had to sound as though I knew what I was talking about in order to pull it off. I was surrounded by adults, and my peer group became my coworkers at the store.

My father worked behind a counter which had a glass separating it from the rest of the store. He and the other pharmacists wore starched white shirts which buttoned on the side with “McCLURE’S DRUGS” monogrammed in red above the pocket. The rest of us wore plastic ink guards in our breast pockets which had printed in script letters “McClure’s has free delivery.” (The word delivery had wheels and a forward slant.) I worked there full-time when I was four and five and I suspected that when I went to school the next year I would work a split shift from 6:00 to 9:00 a.m. and then again after school until closing time at 10:00 p.m. Of course I would always work full-time on Saturday and Sunday when my mother did her important work with the historical board. I restocked the candy and makeup counters, loaded the newspaper racks, and replenished the supplies of magazines and comics. I read the comics aloud in different voices, jumped out of the pay-phone booth as Superman and acted out Brenda Starr “in her ruthless search for truth,” and every morning at 6:00 a.m. I equipped the outdoor newsstand of blue wood with its tiered layers with the Niagara Falls Gazette.

My parents were removed from the hurly-burly of my everyday existence. My father was my employer, and I called him “boss,” which is what everyone else called him. My mother provided no rules nor did she ever make a meal, nor did I have brothers or sisters to offer me any normal childlike role models. While other four-year-olds spent their time behind fences at home with their moms and dads, stuck in their own backyards making pretend cakes in hot metal sandboxes or going to stagnant events like girls’ birthday parties where you sat motionless as the birthday girl opened her presents and then you waited in line to stick a pin into a wall while blindfolded, hoping it would hit the rear end of a jackass, I was out doing really exciting work. I spent my time in the workforce delivering prescriptions with Roy, my coworker.

One thing about a drugstore: it’s a great leveller. Everyone from the rich to the poor needs prescriptions and it was my job to deliver them. Roy, the driver, and I, the assistant who read the road maps and prescription labels, were dogged as we plowed through snowstorms and ice jams to make our deliveries. The job took us into mansions on the Niagara Escarpment, to the home of Dupont, who invented nylon, to deliver hypodermic needles to a new doctor on the block, Dr. Jonas Salk, an upstart who thought he had a cure for polio, to Marilyn Monroe on the set of Niagara, to the poor Indians on the Tuscarora reservation, and to Warty, who lived in a refrigerator box in the town dump. The people we delivered to felt like my “family,” and my soulmate in this experience was Roy.

“Although Catherine Gildiner didn't grow up dirt-poor in Ireland, or communing with gophers on the Depression-era Prairie, her tale of life as an eccentric, middle-class Catholic school girl in 1950s Lewiston, N.Y., is no less memorably and skillfully told than [Angela's Ashes and Who Has Seen the Wind?].… a revealing and vivid portrait of small-town America around the 1950s.… Anyone who ever was, or has, a child considered different in some way will enjoy this book. The author is among those who has survived the funny, sad, hard knocks of butting childhood ideals up against the real world, of painfully seeing through, and losing faith in, the rote pieties of religious indoctrination, and the hypocrisies of small-town respectability, 1950s-style. The author's maturity, her ability to forgive rather than blame, informs this book and is the ultimate gift to the reader.” — Globe and Mail

Close to the Falls