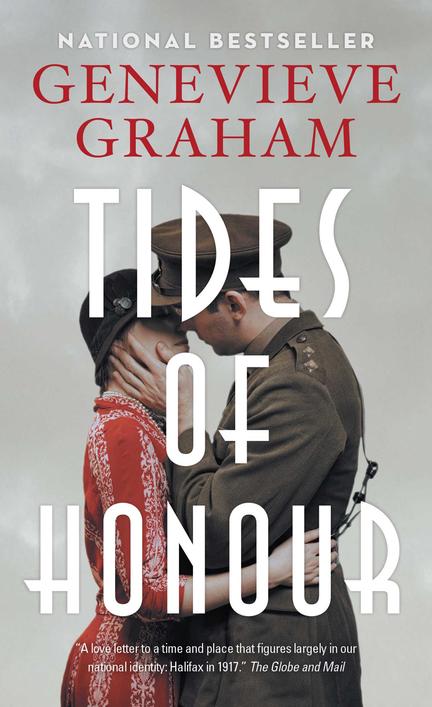 From bestselling author Genevieve Graham comes a novel of love, loss, and honour amidst the horrors of war and its aftermath.

In the summer of 1916, Private Daniel Baker marches into battle with the boys of Nova Scotia’s 25th Battalion. Out of brutal necessity, Danny has steeled himself against the trials and horrors of war, but he is completely unprepared to meet the love of his life in war-torn France.
Audrey Poulin has the soul of an artist. She lives alone with her grandmother in the quiet French countryside, where her only joy is in her brush and palette. When, by chance, she encounters Danny, the handsome young soldier captures her heart and inspires her painting. The young lovers believe that only together can they face the hardships the war brings.
But love is just the beginning. Mere months later, Danny is gravely wounded at the Battle of the Somme, and his future is thrown into uncertainty. Soon, he and Audrey find themselves struggling to build a new life in Halifax, a city grieving its lost men. As the grey winter of 1917 sets in, Danny’s lack of purpose and Audrey’s isolation continue to mount, pulling the two apart just as a new catastrophe threatens their existence.
Heartrending and enthralling, Tides of Honour is a novel of love and second chances set against Halifax’s most devastating moment of the First World War.

Genevieve Graham graduated from the University of Toronto with a degree in music in 1986 and began writing in 2007. She is passionate about breathing life back into history through tales of love and adventure and loves the challenge of re-living Canadian history in particular. Her previous novel, Tides of Honour, was a Globe and Mail bestseller. When Graham is not writing, she can be found relaxing with her husband and two grown daughters, teaching piano to children in the community, or tending the garden along with a friendly flock of heritage chickens. She lives near Halifax, Nova Scotia. Visit her at GenevieveGraham.com.

“[Graham] has delivered a book that reads like a love letter to a time and place that figures largely in our national identity: Halifax in 1917.”
–The Globe and Mail

“Travel back to 1917 and explore a world of suffragettes, Bolsheviks and the Great War - and the love story that illuminates them all.”
—Jon Tattrie, author of Black Snow

“Evocative of place and time, a novel blending tragedy and triumph in a poignant and uplifting tale that’s sure to leave its mark upon your heart.”
—Susanna Kearsley, a New York Times & Globe and Mail bestselling author

“A moving Maritime story of love, loss, and the human spirit.”
—Lesley Crewe, author of Relative Happiness and Kin

“Genevieve Graham has created a memorable story of love surviving devastation. Set during the darks days of the Halifax Explosion—the largest man-made explosion prior to Hiroshima—a young artist and a wounded soldier are forced to overcome their personal struggles in the face of disaster. Graham examines class struggles and the post-traumatic effect of war with a vivid description of early twentieth century Halifax.”
—Pamela Callow, international bestselling author

“Audrey is a strong female character, a hallmark of Graham’s books.”
—The Chronicle Herald

“Fans of Gabaldon and other historical fiction/romance writers will lap this up for the classy, fast-moving, easy-to-read and absorbing book that it is -- with some Canadian history to boot.”
—Winnipeg Free Press

Other titles by Genevieve Graham

Letters Across the Sea

At the Mountain's Edge