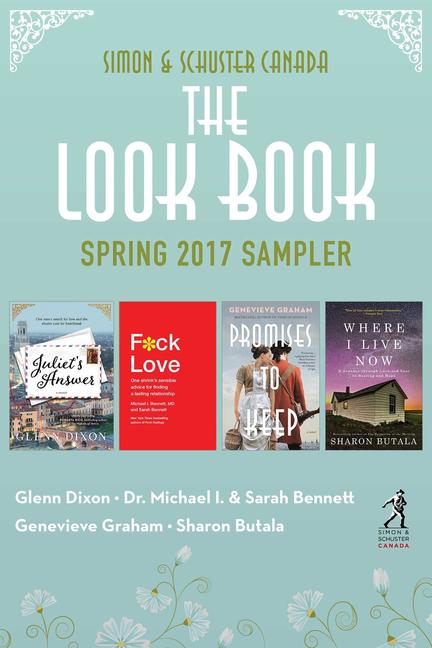 Navigating the mysteries of the heart, The Look Book offers a road map for every stage of love with the best in fiction and nonfiction from across the Spring 2017 Simon & Schuster Canada list.

Travel to Verona, Italy, where one man embarks on a quest to find true love. Learn the practical tips and advice to find and maintain a thriving relationship from a psychiatrist and his comedy-writing daughter (don’t worry—they’re funny). Let yourself be whisked away to 1755 Acadia where a looming war threatens to tear a young couple apart. Read about one woman’s profound journey through grief and loss to a place of renewal and hope as she remembers the greatest love of her life.

With chapter excerpts from the following Spring 2017 new releases:

Juliet’s Answer: One Man’s Search for Love and the Elusive Cure for Heartbreak, by Glenn Dixon

F*ck Love: One Shrink’s Sensible Advice for Finding a Lasting Relationship, by Michael I. Bennett, MD, and Sarah Bennett

Promises to Keep, by Genevieve Graham

Where I Live Now: A Journey through Love and Loss to Healing and Hope, by Sharon Butala

We hope your heart finds what it needs.

The team at Simon & Schuster Canada

An author, musician and documentary film maker, Glenn Dixon has traveled through more than seventy-five countries and written for National Geographic, the New York Post, The Walrus, The Globe and Mail, and Psychology Today. He holds an M.A. in socio-linguistics and his second book, Tripping the World Fantastic, was shortlisted for the W.O. Mitchell award. A high-school English teacher for twenty years, he has left that to become a full-time writer. He lives in Calgary with his girlfriend. Visit him at GlennDixon.ca or follow him on Twitter @Glenn_Dixon.

Dr. Michael I. Bennett, educated at both Harvard College and Harvard Medical School, is a board-certified psychiatrist, Canadian, and Red Sox fan. While he’s worked in every aspect of his field, from hospital administration to managed care, his major interest is his private practice that he’s been running for almost thirty years. The author of F*ck Feelings, with his daughter Sarah Bennett, he lives with his wife in Boston and New Hampshire.

Sarah Bennett has written for magazines, the Internet, television, and books. She also spent two years writing for a monthly sketch comedy show at the Upright Citizens Brigade Theater in New York City. When not living by her philosophy of “will write for food,” Sarah walks her dog, watches Red Sox games, and avoids eye contact with other humans. Somehow, she lives in New Hampshire and works in New York. F*ck Feelings, written with her father Dr. Michael I. Bennett, is her first book.

Genevieve Graham graduated from the University of Toronto with a degree in music in 1986 and began writing in 2007. She is passionate about breathing life back into history through tales of love and adventure and loves the challenge of re-living Canadian history in particular. Her previous novel, Tides of Honour, was a Globe and Mail bestseller. When Graham is not writing, she can be found relaxing with her husband and two grown daughters, teaching piano to children in the community, or tending the garden along with a friendly flock of heritage chickens. She lives near Halifax, Nova Scotia. Visit her at GenevieveGraham.com.

Other titles by Glenn Dixon

One Man's Search for Love and the Elusive Cure for Heartbreak

A Journey Through the Music of Our Planet

Pilgrim in the Palace of Words

A Journey Through the 6,000 Languages of Earth

Other titles by Michael Bennett

One Shrink's Sensible Advice for Finding a Lasting Relationship

One Shrink's Practical Advice for Managing All Life's Impossible Problems

Other titles by Sarah Bennett

One Shrink's Sensible Advice for Finding a Lasting Relationship

One Shrink's Practical Advice for Managing All Life's Impossible Problems

Other titles by Genevieve Graham

Letters Across the Sea

At the Mountain's Edge