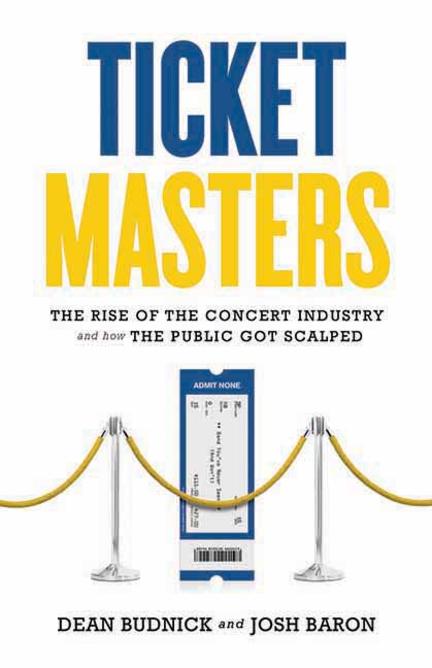 In the spring of 1975 a trio of neophyte businessmen backed an old Chrysler onto a sun-baked Arizona driveway and convened in their new office. The garage start-up, dubbed Ticketmaster, would come to achieve such market dominance over the following decades some critics would denounce the company as an unlawful monopoly. Yet its path to the top was far from inevitable and Ticket Masters analyzes the legality and ethics behind the actions of Ticketmaster, including its recent merger with Live Nation. It answers such questions as Just what is included in a service fee and why does it vary with the price of a ticket? Why am I forced to pay for parking when I’m taking public transportation to the concert? and Who really pockets all of that money? This guide to the concert industry looks into cubicles, conference rooms, and booking agencies and includes interviews with promoters, musicians, and corporate executives with connections to both Ticketmaster and the bands. Special attention is paid to the touring activities and ticket-selling practices of the Grateful Dead, Pearl Jam, U2, Dave Matthews Band, and the Rolling Stones.

Dean Budnick is the executive editor of Relix magazine, the founder of www.jambands.com, and the author of Jam Bands and The Phishing Manual. He holds a Ph.D. from Harvard's History of American Civilization program and a J.D. from Columbia Law School. Josh Baron is the editor in chief of Relix magazine and contributes to a variety of media outlets on music and ticketing. They both live in New York City.

Excerpt: Ticket Masters: The Rise of the Concert Industry and How the Public Got Scalped (by (author) Dean Budnick & Josh Baron)

THE CHAIRMAN HAD SPOKEN

On the evening of August 3, 2010, Irving Azoff, whose role as chief executive officer of Ticketmaster had recently expanded following an industry altering merger that furnished the new Title of Live Nation executive chairman, bypassed the company’s publicity firm to offer his first direct message to ticket buyers via the social networking service Twitter.

Azoff’s comments fell in the midst of what looked to be the most miserable U.S. summer concert season on record. Weak ticket sales had forced the cancellation of numerous high–profile performances, starting with a series of stadium shows by Azoff’s longtime management client the Eagles on a bill with country superstars the Dixie Chicks and Keith Urban. In the weeks that followed a number of “recession–proof” acts did the same, as the Jonas Brothers, Rihanna and Lilith Fair all canceled multiple dates. Limp Bizkit scrapped its U.S. amphitheater tour and Christina Aguilera soon followed suit, citing “prior commitments.” Even the annual American Idols Live! outing, which had blown out tickets in prior years, was forced to scale back its itinerary, dropping seven shows and rescheduling many others.

Entertainment reporters and Wall Street pundits alike took particular interest in the flagging amphitheater sales figures since most of these “sheds” were under the control of Live Nation. The summer of 2010 represented the first official go–round for the blended company after the government had approved the union of the world’s largest live event promoter, Live Nation, with the world’s largest ticketing agency, Ticketmaster (which had recently acquired the world’s largest artist management firm, Azoff’s Front Line).

The Department of Justice’s ruling had been preceded by nearly eleven months of inquiry and two congressional hearings. In February 2009, shortly after the corporations announced their intent to unite, Azoff had been summoned to Capitol Hill in a moment that echoed former Ticketmaster CEO Fred Rosen’s 1994 appearance before Congress in the wake of a public dustup with Pearl Jam. However, unlike the earlier inquiry, which in many respects resulted from the fight over a nickel, by 2009 billions of nickels were in play. As a result, both the House Subcommittee on Antitrust and the House Subcommittee on Courts and Competition Policy elected to weigh in on the matter.

Ultimately though, it fell to the Obama White House and his Department of Justice to determine whether to block the merger as an illegal restraint of trade. The federal government eventually granted its permission over the strident objections of opponents, who charged that the mega–company would raise prices and inhibit the development of new musical artists. By August 2010 a growing segment of the financial community began offering its own criticism, as initial optimism regarding the prospects of Live Nation Entertainment was falling in tandem with the rate of ticket sales.

Over the course of the summer the company had taken a series of increasingly desperate measures to draw Audiences into its amphitheaters. Package deals that offered coupons for a free soda and a hot dog gave way to mid– June’s “No Services Fees” promotion, which proclaimed, “Your summer concert tickets at Live Nation amphitheaters now have No Service Fees” (even as an asterisk qualified, “Parking, shipping and other non ‘service fee’ costs may apply”).

In late July the company instituted a $10 ticket program, which dropped prices even lower, scrambling to achieve a short–term financial benefit that led some prior ticket holders to grouse about their decision to purchase seats during initial sales at much greater expense.

When the expected windfall wasn’t realized, Live Nation then outfitted employees with sandwich boards and paraded them through its venues, tickets in hand, hawking the cheap seats for future shows. Yet despite all of this, sales figures remained low as Audiences were uncomfortable with the overall price structure of the concert experience.

In the face of these events, at 10:53 p.m. on August 3, Executive Chairman Azoff shared his sentiments with the public via the immediacy of Twitter.

“So if you want ticket prices to go down stop stealing music.”

Seemingly absolving his company of responsibility, Azoff placed the burden squarely on the overburdened shoulders of consumers. This wasn’t the first time he had conveyed such a message. A few weeks earlier, at Fortune magazine’s Brainstorm Tech conference in Aspen, he had shared similar thoughts about his customer base with the magazine’s managing editor: “If they could figure out a way to steal the tickets they would, just like they steal movies and music. But so far they haven’t figured out how to do that.”

The declining sales of recorded music held deep significance for Azoff, who in addition to running Front Line Management had previously headed both MCA and Giant Records. Still, few concertgoers appreciated his sentiment, flustered and frustrated as they were by parking costs, concession prices, $5 add–ons for the “luxury” of a short, ordered line into the venue, as well as the very price of tickets themselves, with their vexing array of fees. Consumers pointed, for instance, to Lady Gaga’s Monster Ball tour, in which a single $20 lawn ticket could cost nearly $50 after a “facility charge” ($12), “convenience charge” ($10.05), “order processing fee” ($5.20) and “TicketFast Delivery,” i.e., print–at–home ticketing ($2.50).

The sheer magnitude of it all had led one would–be concertgoer to profess in an online forum, with equal measures of humor and irritation, “Screw Live Nation, I’m grabbing these tix after the show.”

Other music fans were baffled by their attempts to ascertain the fundamentals of concert ticket pricing. What is included in a service fee, they wondered, and why does the cost of that service vary with the price of a ticket? Who profits from these extra charges? Why are tickets sold online with impunity for five times their face value? Aren’t there laws to protect consumers? Are musicians really scalping their best seats? And what’s up with these VIP packages? Where do they find those front row tickets, and who reaps the benefits? Just what is a facility fee, and if the public is paying for renovations of some sort, shouldn’t all the amphitheaters be recast in platinum by now? And just how did ticket prices get so high anyhow?

"A fascinating insider's portrait of the music business once all of the pulsing lights, fog machines and sound equipment have been turned off." “Maclean's (June 27, 2011)

"[A] lively, sprawling chronology of the concert-ticket sales business . . . Budnick and Baron offer information in accessible language fortified with verbatim dialogue from a pantheon of music-industry brass." Kirkus Reviews (April 15, 2011)

"A clear, comprehensive look at a murky business, the book is also an encyclopedia of information about the rise, decline and rebirth of the live music industry." Wall Street Journal (May 28, 2011)

“Who turned concert ticketing into a monstrous machine for bleeding music fans dry? Dean Budnick and Josh Baron of Relix chronicle the rise of the Ticketmaster juggernaut — and hell-spawn like Clear Channel, StubHub, and Live Nation — by following the money with the dogged persistence of detectives and a knack for turning bottom-line history into engaging narrative . . . If you wonder why you’re paying ten times as much for overblown, cross-promoted spectacles that are one-tenth as satisfying as the rock and roll of your youth, you need to read this book.” — Steve Silberman, Editor, Wired magazine

"Fascinating. . . . [The authors] delve deep into every aspect of the tour biz, from the rise of computerized ticketing to the consolidation of concert promoters." Rolling Stone (June 9, 2011)

"In other hands, this book could have been dull and academic, but it reads like an adventure story, full of colorful characters, shady transactions, and surprising twists and turns. For everyone who has been dumbstruck by the extra fees added to the price of admission, this book is just the ticket. Highly recommended for eventgoers everywhere." Library Journal (May 1, 2011)

"Budnick and Baron did a tremendous job in chronicling the history of the U.S. and Canadian concert business and how the business models have changed. . . . Ticket Masters is an excellent book for music historians and business geeks alike." “www.boomerocity.com

Other titles by Dean Budnick