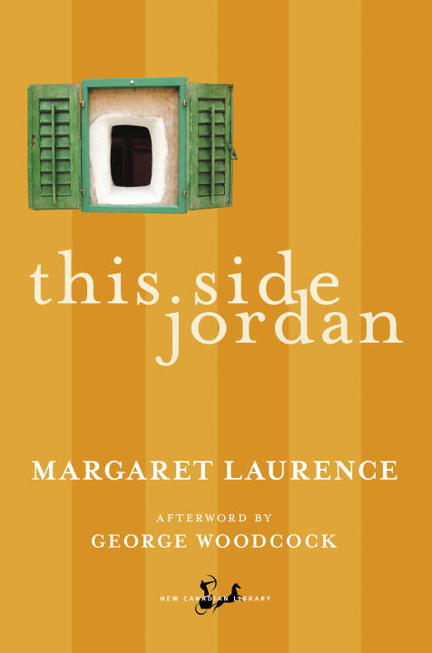 In 1957, the British colony of the Gold Coast broke free to become the independent nation of Ghana. Margaret Laurence’s first novel, This Side Jordan, recreates that colour-drenched world: a place where men and women struggle with self-betrayal, self-discovery, and the dawning of political pride.

This Side Jordan transcends the traditional limits of the first novel. Its powerful and compassionate characterizations and its themes of exile and community anticipate the five later novels that make up Laurence’s acclaimed Manawaka series. A major work of lasting significance, This Side Jordan creates echoes in the mind of the reader as resonant as the drums of Ghana.

George Woodcock (1912-1995) is one of Canada's best-known and most prolific authors. He was born in Winnipeg and educated in England, where he socialized with some of the century's most prominent writers and intellectuals including Aldous Huxley, George Orwell, Herbert Read and T.S. Eliot. He returned to Canada in 1949 and taught at the University of British Columbia for many years. In 1959, he founded the journal Canadian Literature. His contribtution to Canadian culture is immeasurable; he either wrote or edited over one-hundred books including The Crystal Spirit, his Governor-Genral's award-winning biography of Orwell; Gabriel Dumont, another bestselling biography; and Anarchism a guide to the political philosophy which continues to be read around the world. His wide range of writing includes literary criticism, poetry, travel writing, plays, social history, biography, politics and essays.

Excerpt: This Side Jordan (by (author) Margaret Laurence; afterword by George Woodcock)

One  The six boys were playing the Fire Highlife, playing it with a beat urgent as love. And Johnnie Kestoe, who didn't like Africans, was dancing the highlife with an African girl. Charity's scarlet smile mocked his attempts to rotate his shoulders and wriggle his European hips to the music. Her own fleshy hips and buttocks swayed easily, and her big young breasts, unspoiled by children and only lightly held by her pink blouse, rose and fell as though the music were her breath. Johnnie grinned awkwardly at her, then he jerked his head away. 'Fiyah, fiyah, fiyah, fiyah- ma,Fiyah deah come – baby!Fiyah, fiyah, fiyah, fiyah- ma,Fiyah deah come – ah ah!I went to see my lovely boy,Lovely boy I love so well –' At one of the tables around the outdoor dance floor, a young European woman watched thoughtfully. At another table an African man watched, then turned away and spat. Both were angry, and with the same person.  Music was the clothing of West African highlife, but rhythm its blood and bone. This music was sophisticated. It was modern. It was new. To hell with the ritual tribal dance, the drums with voices ancient as the forest. The torn leaves of the palm trees shivered in the wind and the strings of fairy lights glittered like glass beads in the musty courtyard. The dancers themselves did not analyse the highlife any more than they analysed the force that had brought them all together here, to a nightclub called 'Weekend In Wyoming', the wealthy and the struggling, the owners of chauffeur-driven Jaguars and the riders of bicycles. They were bound together, nevertheless, by the music and their need of it. Africa has danced pain and love since the first man was born from its red soil. But the ancient drums could no longer summon the people who danced here. The highlife was their music. For they, too, were modern. They, too, were new. And yet the old rhythms still beat strongly in this highlife in the centre of Accra, amid the taxi horns, just as a few miles away, in Jamestown or Labadi, they pulsed through the drums while the fetish priestess with ash- smeared cheeks whirled to express the unutterable, and the drummer's eyes grew glassy and still, his soul drugged more powerfully than the body could be. Into the brash contemporary patterns of this Africa's fabric were woven symbols old as the sun- king, old as the oldest continent.

The Letters of Margaret Laurence and Gabrielle Roy

Other titles by George Woodcock

Early Canadian Poets and Their Background

Walking Through the Valley

Power to Us All

The Heaviness of Things That Float is, at its heart, a novel about decolonization and the moral obligation of non-Indigenous people to take part in this …