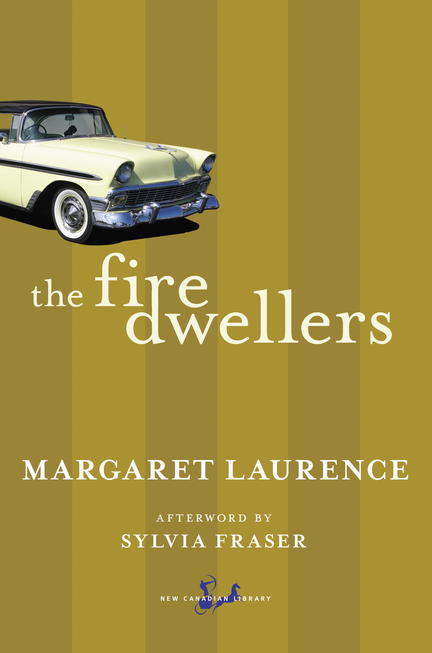 Stacey MacAindra burns – to burst through the shadows of her existence to a richer life, to recover some of the passion she can only dimly remember from her past.

The Fire-Dwellers is an extraordinary novel about a woman who has four children, a hard-working but uncommunicative husband, a spinster sister, and an abiding conviction that life has more to offer her than the tedious routine of her days.

Margaret Laurence has given us another unforgettable heroine – human, compelling, full of poetry, irony and humour. In the telling of her life, Stacey rediscovers for us all the richness of the commonplace, the pain and beauty in being alive, and the secret music that dances in everyone’s soul.

SYLVIA FRASER was born in Hamilton, Ontario and graduated from the University of Western Ontario with an Honors B.A. in English & Philosophy. She worked for many years as a feature writer for the Toronto Star Weekly, travelling extensively throughout North America, including the Arctic, as well as Mexico, Panama, Europe, and Africa. Literary Critic Elizabeth Westbrook described Sylvia's writing as "the best kind of fiction: accessible and entertaining stories embedded in rich complexity." She is responsible for six novels: Pandora (1972), The Candy Factory (1975), A Casual Affair (1978), The Emperor's Virgin(1980), Berlin Solstice (1984), and The Ancestral Suitcase (1996). Her non-fiction works include: The Quest for the Fourth Monkey: A Thinker's Guide to the Psychic and Spiritual Revolution (published in 1992 as The Book of Strange) awarded the American Library Association Book List Medal in 1994; My Father's House: A Memoir of Incest and of Healing (1987), extensively translated and adapted for the stage, received the Canadian Authors Association Non-Fiction Book Award in 1987. Fraser is also the recipient of the Women's Press Club Award for Canadian Journalism, 1967 and 1968; the President's Medal for Canadian journalism, 1968; and the National Magazine Gold Medal for Essays, 1994.
For many years, Fraser taught Creative Writing at Banff Centre. She has conducted numerous lectures and workshops sponsored by a variety of universities. She served on the Arts Advisory Panel to The Canada Council and was a member of The Canada Council's 1985 Cultural Delegation to China. Currently, Sylvia is vice-chair of The Writers' Development Trust, a charitable organization for the support and promotion of Canadian authors.

“A tribute to Margaret Laurence’s talent…authentic freshness of vision and insight.”
–Canadian Forum

“Laurence is the best fiction writer in the Dominion and one of the best in the hemisphere.”
–Atlantic Monthly

A Jest of God

A Bird in the House

Other titles by Sylvia Fraser

The Rope in the Water

A Pilgrimage to India

Exploring the Mysteries of the Amazon