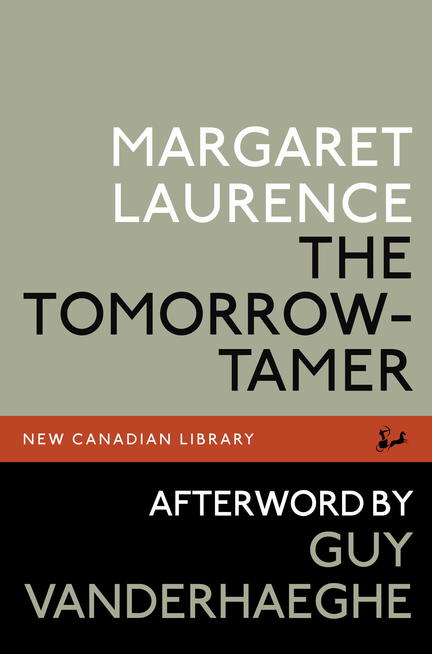 The ten stories gathered together in The Tomorrow-Tamer are Margaret Laurence’s first published fiction. Set in raucous and often terrifying Ghana, where shiny Jaguars and modern jazz jostle for eminence against fetish figures, tribal rites, and the unchanging beat of jungle drums, the stories tell of individuals, European and African, trying to come to terms with the frightening world brought about by the country’s new freedom.

With the same compassion and understanding she would bring to her later fiction set in Canada, Laurence succeeds brilliantly in capturing the atmosphere of a continent and of individual men and women struggling for survival under the impact of the wind of change.

The dust rose like clouds of red locusts around the small stampeding hooves of taggle-furred goats and the frantic wings of chickens with all their feathers awry. Behind them the children darted, their bodies velvety with dust, like a flash and tumble of brown butterflies in the sun.

The young man laughed aloud to see them, and began to lope after them. Past the palms where the tapsters got wine, and the sacred grove that belonged to Owura, god of the river. Past the shrine where Nana Ayensu poured libation to the dead and guardian grandsires. Past the thicket of ghosts, where the graves were, where every leaf and flower had fed on someone’s kin, and the wind was the thin whisper-speech of ancestral spirits. Past the deserted huts, clay walls runnelled by rain, where rats and demons dwelt in unholy brotherhood. Past the old men drowsing in doorways, dreaming of women, perhaps, or death. Past the good huts with their brown baked walls strong against any threatening night-thing, the slithering snake carrying in its secret sac the end of life, or red-eyed Sasabonsam, huge and hairy, older than time and always hungry.

The young man stopped where the children stopped, outside Danquah’s. The shop was mud and wattle, like the huts, but it bore a painted sign, green and orange. Only Danquah could read it, but he was always telling people what it said. Hail Mary Chop-Bar & General Merchant. Danquah had gone to a mission school once, long ago. He was not really of the village, but he had lived here for many years.

Danquah was unloading a case of beer, delivered yesterday by a lorry named God Helps Those, which journeyed fortnightly over the bush trail into Owurasu. He placed each bottle in precisely the right place on the shelf, and stood off to admire the effect. He was the only one who could afford to drink bottled beer, except for funerals, maybe, when people made a show, but he liked to see the bright labels in a row and the bottle-tops winking a gilt promise of forgetfulness. Danquah regarded Owurasu as a mudhole. But he had inherited the shop, and as no one in the village had the money to buy it and no one outside had the inclination, he was fixed here for ever.

He turned when the children flocked in. He was annoyed at them, because he happened to have taken his shirt off and was also without the old newspaper which he habitually carried.

The children chuckled surreptitiously, hands over mouths, for the fat on Danquah’s chest made him look as though the breasts of a young girl had been stuck incongruously on his scarred and ageing body.

“A man cannot even go about his work,” Danquah grumbled, “without a whole pack of forest monkeys gibbering in his doorway. Well, what is it?”

The children bubbled their news, like a pot of soup boiling over, fragments cast here and there, a froth of confusion.

Attah the ferryman — away, away downriver (half a mile) — had told them, and he got the word from a clerk who got it from the mouth of a government man. A bridge was going to be built, and it was not to be at Atware, where the ferry was, but — where do you think? At Owurasu! This very place. And it was to be the biggest bridge any man had ever seen — big, really big, and high — look, like this (as high as a five-year-old’s arms).

“A bridge, eh?” Danquah looked reflectively at his shelves, stacked with jars of mauve and yellow sweets, bottles of jaundice bitters, a perfume called Bint el Sudan, the newly-arranged beer, two small battery torches which the village boys eyed with envy but could not afford. What would the strangers’ needs be? From the past, isolated images floated slowly to the surface of his mind, like weed shreds in the sluggish river. Highland
Queen whisky. De Reszke cigarettes. Chivers marmalade. . . .

The Letters of Margaret Laurence and Gabrielle Roy

Expatriate writing has always been a big part of Canada’s literature. Here are seven titles that take you, literally, to a whole other place.