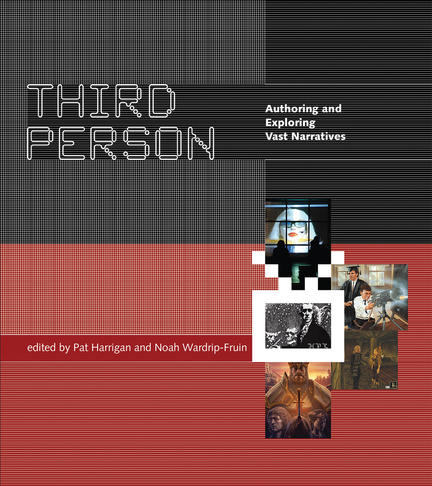 Narrative strategies for vast fictional worlds across a variety of media, from World of Warcraft to The Wire.

The ever-expanding capacities of computing offer new narrative possibilities for virtual worlds. Yet vast narratives—featuring an ongoing and intricately developed storyline, many characters, and multiple settings—did not originate with, and are not limited to, Massively Multiplayer Online Games. Thomas Mann's Joseph and His Brothers, J. R. R. Tolkien's Lord of the Rings, Marvel's Spiderman, and the complex stories of such television shows as Dr. Who, The Sopranos, and Lost all present vast fictional worlds. Third Person explores strategies of vast narrative across a variety of media, including video games, television, literature, comic books, tabletop games, and digital art. The contributors—media and television scholars, novelists, comic creators, game designers, and others—investigate such issues as continuity, canonicity, interactivity, fan fiction, technological innovation, and cross-media phenomena. Chapters examine a range of topics, including storytelling in a multiplayer environment; narrative techniques for a 3,000,000-page novel; continuity (or the impossibility of it) in Doctor Who; managing multiple intertwined narratives in superhero comics; the spatial experience of the Final Fantasy role-playing games; World of Warcraft adventure texts created by designers and fans; and the serial storytelling of The Wire. Taken together, the multidisciplinary conversations in Third Person, along with Harrigan and Wardrip-Fruin's earlier collections First Person and Second Person, offer essential insights into how fictions are constructed and maintained in very different forms of media at the beginning of the twenty-first century.

Pat Harrigan is a freelance writer and editor, most recently of Zones of Control: Perspectives on Wargaming, coedited with Matthew Kirschenbaum (MIT Press). His work has been published widely and he is the author of a novel, Lost Clusters, and a collection of short stories, Thin Times and Thin Places.

Noah Wardrip-Fruin is Professor in the Department of Computer Science at the University of California, Santa Cruz. He is the coeditor of four collections published by the MIT Press: with Nick Montfort, The New Media Reader (2003); with Pat Harrigan, First Person: New Media as Story, Performance, and Game (2004),Second Person: Role-Playing and Story in Games and Playable Media (2007), and Third Person: Authoring and Exploring Vast Narratives (2009).

Other titles by Pat Harrigan