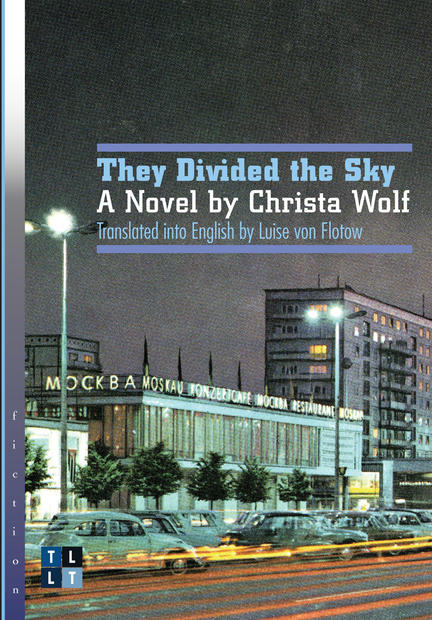 First published in 1963, in East Germany, They Divided the Sky tells the story of a young couple, living in the new, socialist, East Germany, whose relationship is tested to the extreme not only because of the political positions they gradually develop but, very concretely, by the Berlin Wall, which went up on August 13, 1961.

The story is set in 1960 and 1961, a moment of high political cold war tension between the East Bloc and the West, a time when many thousands of people were leaving the young German Democratic Republic (the GDR) every day in order to seek better lives in West Germany, or escape the political ideology of the new country that promoted the "farmer and peasant" state over a state run by intellectuals or capitalists. The construction of the Wall put an end to this hemorrhaging of human capital, but separated families, friends, and lovers, for thirty years.

The conflicts of the time permeate the relations between characters in the book at every level, and strongly affect the relationships that Rita, the protagonist, has not only with colleagues at work and at the teacher's college she attends, but also with her partner Manfred (an intellectual and academic) and his family. They also lead to an accident/attempted suicide that send her to hospital in a coma, and that provide the backdrop for the flashbacks that make up the narrative.

Wolf's first full-length novel, published when she was thirty-five years old, was both a great literary success and a political scandal. Accused of having a 'decadent' attitude with regard to the new socialist Germany and deliberately misrepresenting the workers who are the foundation of this new state, Wolf survived a wave of political and other attacks after its publication. She went on to create a screenplay from the novel and participate in making the film version. More importantly, she went on to become the best-known East German writer of her generation, a writer who established an international reputation and never stopped working toward improving the socialist reality of the GDR.

Luise von Flotow has published literary translations from German and French since the 1980s. Her interest in Christa Wolf and the re-translation of Der geteilte Himmel stems from her family background (origins in the northeast of Germany), extensive research and travel in East Germany (1986-1990), and the discovery and study of the existing translation (Divided Heaven 1965, Seven Seas Verlag, East Berlin.)

"An ardent young socialist convinced of culture’s mission to educate, Wolf wrote her first novel in 1963. Originally called “Divided Heaven”, it has now been reissued as “They Divided the Sky”. The difference goes deeper than the title. Luise von Flotow’s faithful new rendering replaces a text that had been badly twisted by a zealous editor who was determined to suppress all straying from the party line. ... The new version introduces in English for the first time the introspective, autobiographical voice that became Wolf’s signature and strength. Its fragmented points of view and flashbacks were innovative. From the start her ambition was to honour the inner voice and “bridge the contradiction between party diktat and personal truthfulness”, in the words of her biographer, Jörg Magenau. This made her a revered, almost saintly figure to her East German readers; at the same time, her consistently uncertain, questioning tone put her on a collision course with the socialist leadership."

Other titles by Luise von Flotow

Translating in the 'Era of Feminism'