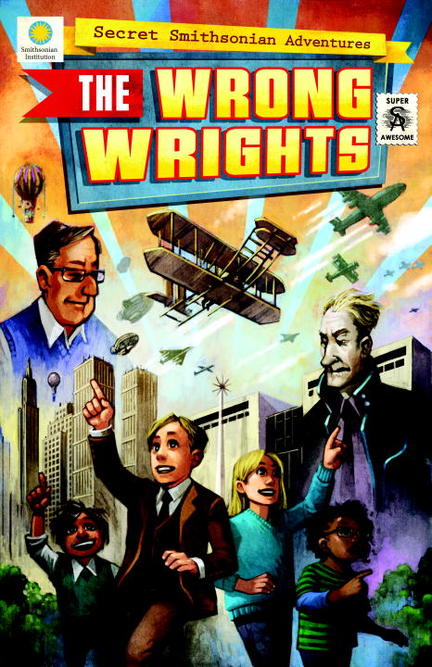 The first graphic novel of the Secret Smithsonian Adventures series. Our heroes intervene to save the National Air and Space Museum from Wright brothers interlopers!

Schoolmates Dominique, Eric, Josephine, and Ajay are excited about a field trip to the Smithsonian's National Air and Space Museum. When they get there, however, they find a very different museum than the one they were expecting. Not only is it much smaller, it's filled with balloons, blimps, and dirigibles, many of them with the same logo: BARRIS AIRSHIPS. Where's the Spirit of St. Louis? Where's the Apollo 11 command module? Where's the Wright Brothers' 1903 flyer? With the help of a museum "fabrications specialist," they travel through time to try and restore the Wright brothers to their well-earned place in history. Along the way they also learn about aerodynamics and other aviation principles from a wise-cracking A.I. named Smitty. But the kids' story doesn't end there--something is amiss in the next stop on their Smithsonian tour, the National Museum of Natural History--so they'll have to work together to save history again in volume two.

STEVE HOCKENSMITH is the New York Times-bestselling author or co-author of 10 books, most recently the Nick and Tesla series of middle-grade mysteries. CHRIS KIENTZ is the writer and producer of the international award-winning Smithsonian Channel television production Raven Tales. LEE NIELSEN is an animator, illustrator, concept artist, and designer.

BOOKLIST
Four middle-schoolers on a field trip to the National Air and Space Museum stumble onto a shocking surprise: the museum has no airplanes. At least, not any more. History has been changed and these four kids must travel back in time to witness a pivotal moment in the history of air-travel and make sure it goes the way it’s supposed to. As this is the first of the Smithsonian Institution's new graphic novel series, it should come as no surprise that hefty helpings of historical fact are integrated into the story in the form of characters and events, along with a final page of deeper historical detail. Happily, the information is relevant and interesting (do you know, for instance, the names of the Wright Brothers’ two major rivals
and the sorts of air ship prototypes they developed?) and painlessly included in a brisk adventure. The crisp art, filled with enjoyable historic detail, also helps to bring out the fun in the education. Some questions are cleverly left dangling to pave the way for further adventures.
— Jesse Karp

A fun and action-packed exploration of aviation. Eric, Dominique, Ajay, and Josephine are the four winners of their school’s science fair and are excited for their field trip to the Smithsonian’s National Air and Space Museum. When they get there, they all feel sick, and after they recover, they realize that the museum’s planes have been replaced with massive balloon structures with the insignia “Barris Air.” They meet Al, the only one who acknowledges the change. Al gives the group talking bracelets that provide historical context and sends them back to 1909 to the Hudson-Fulton Celebration in New York City. The kids realize that something is amiss and follow the people they think are behind the time line shift. They discover that these men, the Barrises, are using holographic disguises to change history and become wealthy in the future. It’s up to the four of them to save the day. This is a fast-paced, light read filled with information about the history of flight. Students will also learn about Orville and Wilbur Wright’s sister, Katharine Wright, whose contributions have often gone unmentioned, as well as other pilots of the time. The paneling is neat and organized, but the speech bubbles can get confusing. Some pages are too crowded with people or text, and the bubbles overlap. Still, the narrative is edifying and humorous, and there is diversity among main and background characters. Back matter offers more material about the Hudson-Fulton Celebration. VERDICT A fun start to what should be an engaging and enlightening series.–Kristyn Dorfman, The Packer Collegiate Institute, Brooklyn, NY

PUBLISHERS WEEKLY
First in the Secret Smithsonian Adventures series, this time-bending graphic novel sends a racially diverse quartet of middle school students into the past to fix a corrupted timeline. Not long after Eric, Josephine, Dominique, and Ajay win a trip to the Smithsonian National Air and Space Museum, an inexplicable time shift erases the museum's airplanes, replacing them with dirigibles. A secretive museum guide transports the children back to October 1909, when rival pilots, including Wilbur Wright, were showing off their flying machines as part of the Hudson-Fulton Celebration in New York City. Holographic disguises help the kids blend in, but they soon attract attention as they attempt to stop mysterious adversaries attempting to sabotage Wilbur's flight. Hockensmith (the Nick and Tesla series) and newcomer Kientz supply a fast-moving story full of banter and one-liners, with details drawn from aviation history (a closing page helps set the record straight). Reminiscent of storyboard art, Nielsen's illustrations can look a bit sketchlike and muddied in places, but he does an adept job of conjuring up the story's historical setting and futuristic tech. Ages 9–12. Authors' agent: Josh Getzler, Hannigan Salky Getzler Agency. (Feb.)
“If you know a kid who needs more comics, heads up! The Smithsonian Institution is set to launch the Secret Smithsonian Adventures, an educational graphic novel series aimed at middle grades readers. Series installments will tie into exhibits from the iconic institution's collection of 19 museums, galleries, and zoos.”  Bustle

“These graphic novels for kids are museum quality.”  The Washington Post

“The Wrong Wrights is intriguing, fun and educational as a story. The art is great for the medium and the piece. Also, if you don’t actually know the historical story, it would be a great experience to read this with your children!  Grab your kid and have fun reading The Wrong Wrights!”  Talking Comics