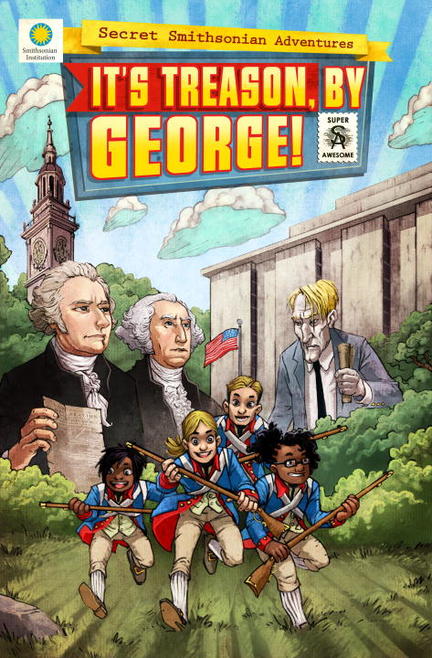 In the third graphic novel of the Secret Smithsonian Adventures series, our heroes visit the National Museum of American History and realize that someone is trying to turn America from a democracy into a monarchy. They must stop this plan to make a president into a king!

Schoolmates Eric, Dominique, Ajay, and Josephine are in their homes getting ready for a normal school day after two successful time-travel adventures. But the day might not turn out to be so normal after all! The kids' parents remind them that today is Coronation Day, and when they get to school, they find the Pledge of Allegiance replaced with an Oath to the King. Clearly, something is amiss, and the only way to fix it is to return to the Smithsonian, this time to the National Museum of American History. Their problems don't end there: the museum's famed American Presidency exhibition has been replaced with one on America's monarchs, complete with a portrait of George Washington being crowned as the first king! Enlisting the help of Gilbert Stuart, John Trumbull, and Thomas Jefferson and using their American history smarts, our heroes must try to thwart this wicked plot to change history.

CHRIS KIENTZ is the writer and producer of the international award-winning Smithsonian Channel television production Raven Tales. STEVE HOCKENSMITH is the New York Times--bestselling author or coauthor of 10 books, most recently the Nick and Tesla series of middle-grade mysteries. LEE NIELSEN is an animator, illustrator, concept artist, and designer.