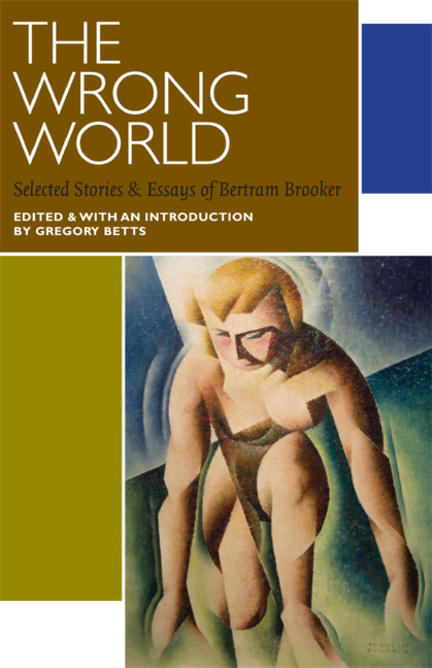 Bertram Brooker won the country's first Governor General's Award for literature in 1936 for his novel Think of the Earth, and his explosive, experimental paintings hang in every major gallery in the country. He was Canada's first multidisciplinary avantgardist, successfully experimenting in literature, visual arts, film, and theatre. Brooker brought all of his experimental ambitions to his short fiction and prose. The Wrong World presents a rich sampling of his prose work, much of it previously unpublished, which adds new insight into his aesthetic ambitions.
Working during an incredible period of transition in Canadian society, Brooker's stories document Canada's evolution from a provincial colony into a modern, urban country. His essays participated in that evolution by advocating a passionate awakening of the arts, the end of prudish sentiment and censorship, and a radical rethinking of the nature of war. They capture the limitations and hypocrisies of the Canadian social contract and argue for a more just and spiritual society. His stories humanize his social vision by dramatizing the psychological and emotional cost of Canada's transition into a modern civilization. In turn devastating, penetrating and poignant, Brooker's prose works offer a sharply focussed window into the turbulent interwar years in Canada.

Bertram Brooker was born in Croydon, England, in 1888. He moved to Manitoba with his family in 1905, where he spent his youth and early adulthood. In 1921 he moved to Toronto, where he became involved in magazine publishing and advertising. He is generally regarded as the first Canadian abstract expressionist. He died in 1955.

"Betts has done a great service to the study of modernism in Canada by recovering and arranging these texts. This collection has great pedagogical potential and can contribute much to a rethinking of how modernism is taught in Canada." -- Canadian Literature

Other titles by Bertram Brooker

eBooks From the Prairies